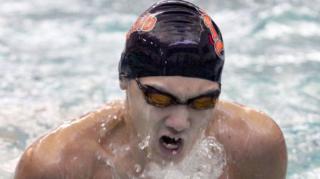 Pair of Barbs headed to state

Ryan Schultz slammed into the wall after the final length of his 100 breaststroke, and he knew it was close. He knew barely a tenth of a second would determine whether his sophomore season ended with a trip to the state meet.

But when Schultz looked up, the clock continued.

Swimmers pulled into the wall after him. On the scoreboard, the time listed next to his No. 3 lane was his second 50-yard split. Above it, the seconds kept ticking. Schultz drifted away from the wall, eyes fixed on the board. He replayed the swim in his head.

The first 50 was strong, he thought, but maybe a tad too good. Before slamming into the wall, Schultz felt the pain on the home stretch. An "awkward" third and final turn didn't help, halting momentum more than building it.

So Schultz waited. The couple seconds before his official time flashed above felt longer. When it finally showed 1:01.11, the DeKalb-Sycamore co-op sophomore lifted both arms and shouted.

Schultz finished third at the St. Charles North Sectional on Saturday. More importantly, he was on the right side of the tenth, beating the state cut time by .17 seconds.

"I was just super happy," Schultz said. "I get to swim for another week. My whole season has been about making it to state."

On the other end of the pool, teammate Kei Ishimaru was almost "going hoarse." The senior already was having a good day. He beat the state cut in the 100 butterfly (52.67 seconds) and 200 IM (1:58.12), finishing third in both events and advancing out of sectionals like he had the previous two years.

But what Ishimaru really wanted, he said, was to bring a teammate with him to the state meet.

"I was right there at the end," Ishimaru said, pointing. "I was watching, I was like three inches from the water, screaming at the water. I was starting to lose my voice. And for [Schultz] to beat that state cut was just mind-boggling."

Ishimaru and Schultz led DeKalb to a third-place finish with 185 points, behind sectional champion St. Charles North (285) and runner-up St. Charles East (277) and 75 points ahead of fourth-place Huntley. Kaneland finished 10th with 13 points.

The Barbs' third-place finish was their best in Ishimaru's four years.

"That was definitely one of our goals coming in here, and we were pretty confident we could do that," DeKalb-Sycamore coach Leah Eames said. "So we're definitely glad that we came in and got that. But more importantly, I just felt like overall today was a great swim for all the guys. Our No. 1 goal all the time at sectionals is to get as many swimmers to state as possible."

Unlike Schultz, Ishimaru's day came with a smidgen of disappointment. He entered as the top seed in the butterfly. Even though he didn't taper for Saturday, choosing to practice through sectionals in preparation for state, he was confident he could bring home the title.

"I went in thinking it was already mine," Ishimaru said.

Instead, the third-place finish left something more to prove. Ishimaru said he'll be shooting for a top-six finish at next weekend's state meet, and his confidence isn't shaken.

"Now that I think about it, I've worked harder this season than any other season in my life," Ishimaru said. "So to be slower than what I expected at this point, I feel like it will pay off next weekend."