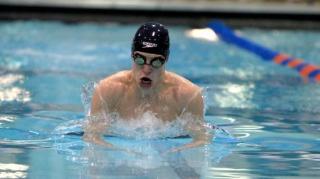 EVANSTON – Postseason veteran Kei Ishimaru gladly adheres to the regulations of the IHSA boys swimming state meet, but the DeKalb-Sycamore co-op senior also has some rules of his own.

Headlining the list: take no more than five minutes to think negatively about a frustrating race. It does your psyche more harm than good.

Ishimaru needed a pair of five-minute reflections on Friday after missing the cut for today’s finals in the 200-yard individual medley and 100 butterfly. After that, he was re-centered and recharged to support sophomore teammate Ryan Schultz, who was unable to advance in the 100 breaststroke.

“I am kind of disappointed in both my swims, but I know the first step to getting better is to stop feeling sorry for myself,” Ishimaru said. “Analyze what I did wrong, then take it a step forward from there, train harder and train smarter.”

An Illinois-Chicago recruit, Ishimaru established a new program record in the butterfly, finishing in 51.67 seconds to take 18th in the 43-swimmer field. His medley time of 1:56.83 approached a personal best but ranked 25th.

The top six swimmers make the championship finals, while those with the seventh- to 12th-best times compete for the consolation title.

Schultz turned in a PR of 1:01 in the breaststroke to tie Oswego co-op swimmer Bucky Coonradt for 39th.

“I was hoping for something a little faster, but it’s always good to drop time,” said Schultz, an alternate on last season’s qualifying 200 medley relay team. “Can’t complain.”

That last part captures Ishimaru’s newfound mindset impeccably. After being named a co-captain this season alongside Alex Feczko, Ishimaru pledged to take “full-fledged responsibilty for the actions that I do.”

His inspiration? Former teammate Michael Gordon, who placed sixth in the breaststroke finals last season on the same day older brother David competed for Xavier in the Atlantic 10 Championships.

Ishimaru’s next area of focus is the YMCA long course nationals, his final big meet before embarking on a collegiate career at UIC.

“I want to improve myself there,” Ishimaru said. “Not leave on a bad note.”