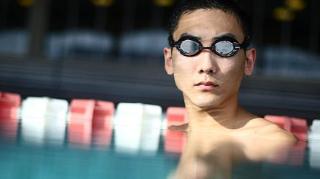 In the pool, Kei Ishimaru’s season was measured in seconds and tenths of seconds – small strokes that determined records and places for the Sycamore senior.

His impact there was undeniable. Ishimaru, the Daily Chronicle Boys Swimmer of the Year, qualified for the state meet for a third straight season, this time in the 100-yard butterfly and 200 individual medley. He broke a 30-year-old DeKalb pool record in the butterfly, finishing his senior night meet in a blazing 52.02 seconds.

Out of the pool, though, is where DeKalb-Sycamore co-op coach Leah Eames said Ishimaru – a co-captain with Alex Feczko – made just as big of an impression.

“I think this is the most team-oriented boys or girls team that I’ve ever had since I’ve coached here,” Eames said. “They’re all very different people but they all just got along really well, with high levels of respect for teammates and me as a coach. I think overall he’s the one that set the precedent on that.”

Ishimaru’s interests outside of swimming might have had something to do with that.

Ishimaru plans on majoring in behavioral psychology and neuroscience in addition to swimming next season for the University of Illinois-Chicago. The two fields have always been passions of his, and he found a way as a captain for the Barbs to connect them to the swim team.

“I just have this thing where I like to listen to people talk about themselves,” he said. “I think about why people do these things. It’s a quirky thing I do.

“Sometimes, I think that my interests in how people think and why people do things ties into practice. I try to utilize that as a life lesson. Maybe it will help me down the road when I think about athletes and their mental doings.”

That approach manifested itself into Ishimaru often leading the encouragement of a young DeKalb-Sycamore squad. Eames said she felt for Ishimaru at times because of the weight the senior put on himself to carry that leadership burden.

“We had an extremely successful season, but even the couple of losses, he was the one that was like, ‘I should have been the one encouraging this person. I should have snapped him out of it. At the halfway point, I should have collected everybody.’ He really took it to heart,” Eames said.

Ishimaru said he simply did what he could, whether it was encouraging someone in the pool or organizing a location for a team breakfast after Saturday practices.

“I took that with the full front of it, responsibility-wise,” Ishimaru said. “But, in a way, I felt like the team handled themselves in a way that the coach Leah could coach them effectively, while setting the standards high in sportsmanship.”

It’s why Ishimaru’s impact out of the pool may reach what he did inside of it.

“I’ll definitely miss him,” Eames said, “but I’m hoping what he started left a definite impact on the current swimmers and will continue the atmosphere and the training and the work ethic that he left behind.”