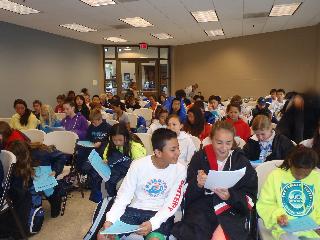 Maria Zhu, Sophie Ramos and David Wang  were selected by the Metro Committee to participate in the 2012 Metro Committee Age Group Camp.  The camp was held at the La Mirada Splash Center on March 24th.  There were 60 swimmers ages 10 to 12 from Metro Committee Teams selected.  Athletes worked on technique and attended classroom sessions on Goal Setting and Nutrition.  Two USA Swimming  National Team Members Chip Peterson and Emily Brunneman were both in attendance.  Each talked to the athletes about their goals, past experiences and their quest to make the 2012 Olympic Team.

Coach Mike was the Camp Director and was assisted by 5 other coaches from the committee.  Sophie Ramos said "This was a great camp and everything was awesome".  Maria Zhu said her favorite part was the breaststroke class.

Congrats to the Tridents who attended!