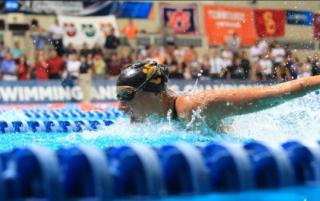 Amanda Smith, a 2007 graduate of Indian Hill High School, captained the University of Southern California Women's Swimming and Diving team as it placed third for the second consecutive year at the NCAA National Championships.

The Championships were held from March 15-17 at Auburn University in Auburn, Alabama. Smith, a senior, anchored both the team's 400 and 800 yard freestyle relays which came in 8th and 4th places, respectively. The 800 free relay also broke a USC school record.

In Smith's time at USC, she has been nominated for the 2012 Pacific Athletic Conference (PAC 12) Athlete of the Year, been appointed to the school provost's Oversight Committee on Academic and Athletic Affairs, served on the Trojan Athletic Senate Executive Board as well as the PAC 12 Athletic Senate Conference. She also was the 2011 Marks Scholar Athlete and has been an academic All-American. She transferred to USC from Indiana University in 2009.

Smith will graduate from USC in May with a Bachelor of Arts in Human Performance. She plans to return to Cincinnati to train for the 2012 Olympic Trials with her local team, the Mason Manta Rays, coached by Ken Heis. Once her swimming career is over, Smith hopes to have a career in medicine, either as a nurse or a doctor. Her parents are Frank and Julie Smith of Indian Hill.