The Road to Omaha Starts in River Hills 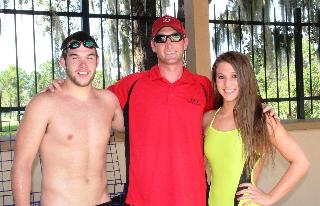 The Road to Omaha Starts in River Hills

According to USA Swimming, the governing body for competitive swimming in the United States, there are over one-quarter million registered competitive swimmers in the U.S. and only about 1,250 or one-half of one percent qualify for Olympic Trials.

Newsome H.S. student athlete, Merrill Wilson and former Jesuit H.S. standout Vinny Donnelly will be traveling with Coach Gesacion this June to compete in the Olympic Trials. “The Olympics are the pinnacle of our sport” says Gesacion, “to be able to coach these two swimmers at this year’s Trials is a tremendous honor and achievement for TBAY Brandon as a team.” In addition to Wilson and Donnelly, Gesacion believes he has two or three other swimmers that have a chance of qualifying to participate. “Teammates feed off of each other’s success; practicing with two Trials qualifiers, is a great motivator for the rest of the team” Gesacion said.

Gesacion is a firm believer in Championship Behavior. “Not all our swimmers will reach such a high level of competition, but they can all learn, internalize and live the Olympic Ideals of vision, focus, persistence, commitment and discipline. We strongly feel that if you help nurture the child, you will help develop (or even unleash) the champion within. That is what we strive to instill everyday here at River Hills. That championship behavior will help every young swimmer succeed in the pool, in the classroom and in whatever path they choose later in life. We have a great group of kids here” Gesacion said.

“Merrill and Vinny will be competing against the best swimmers in the world in Omaha and they will do so with the confidence and commitment to excellence that TBAY Brandon swimmers build upon every day” Gesacion added.

Donnelly who will swim the Men’s 400meter Freestyle added, “It is a HUGE honor that only a few swimmers get to experience in their life.  My mentality going into the meet is to have a positive attitude and embrace the entire experience.”

Merrill Wilson who will compete in the Women’s 200meter Butterfly, “I’m really excited to have the chance to experience the Olympic Trials as an athlete, and very honored to represent TBAY Brandon.”

Gesacion added “This will be an experience that both athletes will remember and cherish for years to come. One thing is for sure, whatever happens in Omaha, they are both Champions in and out of the water!”