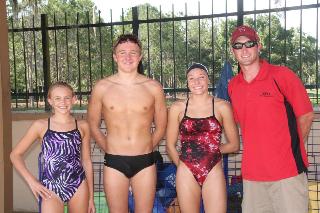 Florida Swimming is made up of 89 swim clubs throughout the State with more than 460 coaches and more than 9600 athletes. Florida Swimming will send a team of 54 top young swimmers this July to Dallas, Texas to compete against the top young swimmers from the Southeastern U.S. with teams from West Virginia to Texas. This regional competition is the last step before swimmers start becoming eligible to compete on a National level.

TBAY Brandon Head Coach Dave Gesacion said, “This is really an accomplishment for our swimmers and our team. To have three eligible candidates with two named to the team from over thousands of swimmers is a testament to our training program and philosophy. Although these swimmers have the talent, work ethic and dedication to attain this level, it is also because of the support of their teammates, parents and our organization over these past years that have helped them reach this stage. At TBAY Brandon we firmly believe that the success of each and every TBAY Brandon swimmer enhances the team as a whole and every fellow team member gains from the successes of their teammates.”

Representing 11-12 year old girls is Christin Rockway, a two-time winner of the Florida Swimming Swimmer of the Year for her age group and Junior Olympic champion currently holding ten top-10 times in Florida for her age group.

In addition to the two swimmers competing, Giorgie Graves, winner of the Jessie Helfrich Hicks Award as the top female swimmer in Hillsborough County and named Tampa Bay Times Hillsborough County Female Swimmer of the Year, was also named a candidate to represent 15-18 year old girls.

Gesacion added “This is an honor for these kids that is especially memorable being an Olympic year when interest in swimming is always at its peak.”