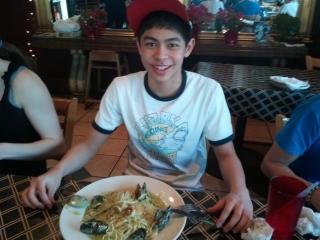 This morning we woke up to 78 degree temperatures.  We had breakfast at 7:00 a.m. and then headed to the pool to be in by 8:00 a.m. for a wake-up swim.  Everyone felt much better in the water today and more prepared for the meet.

After swimming, we rested in our rooms until lunch.  We then went to the sandwich shop right down the street from our hotel where we bumped into some swimmers from the New England area.  So far we have seen swimmers from Bluefish, Storm and Seacoast but we know there are several more teams from New England who are here.

So, yesterday at lunch time Christian was VERY hungry and concerned about when we would be eating lunch.  In fact, he started asking about lunch as soon as our plane landed at 1:00.  We teased him a little about not eating lunch that day and he thought we were serious.  Yesterday, we ate downstairs at the hotel and who's lunch was the last one out.  You guessed it, Christian's!  In fact, everyone was finished eating before his meal was even finished cooking.

Today, when we went to the sandwich shop everyone had eaten and Christian was still standing there waiting for his sandwich.  We couldn't believe it.  Poor Christian, they had forgotten his meal!!!   Not to worry, Coach Janet went up to the counter and asked for it and he did eat (as evidenced by the picture of Christian with his hamburger below).

So, tonight we went to an Italian restaurant for dinner (the group picture is from this restaurant).  I was concerned and did not want Christian to receive his meal last again but we were pleasantly surprised when he received his second (this is the picture at the top).  So, we think the curse has been broken and he won't be forgotten any longer!   The real question is who is next???