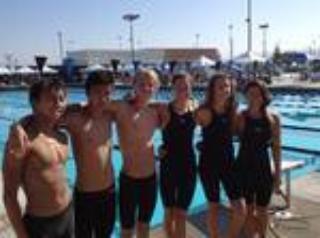 Last Weekend the EBAT Pre-Seniors went down to the 2012 Arena Grand Challenge in beautiful Clovis, California. Clovis is a small town north-east of Fresno, where the 2.5 hour drive down highway 99 places one in a climate that’s a wee bit warmer than the bay area. Mid-day temperatures topped 108 while we were there, but everyone stayed hydrated and swam very well. We had 8 swimmers representing EBAT and almost all of them made finals in at least one event. There were some very fast swimmers at this meet, but the meet was relatively small, which gave many swimmers an opportunity to practice swimming in finals.

Here are some highlights of the meet.  We started with the 200 free on Friday where Kate Miller got a summer sectionals cut, broke a long-standing EBAT record, and earned top seed in the bonus finals. Carson Sand also broke an EBAT record in that event, and all EBAT swimmers got best times in the 200 free.  The next event, 100 breast, was where Carson and Newton Tran got best times and qualified for a consuls final and bonus final respectively. Amanda Houston and Fiona Greer swam the 100 fly next and both got best times! The 200 IM’s were swam really well as all got best times, Carson and Kate qualified for bonus finals, & Kate broke another EBAT record. For finals that evening, Kate dropped a few tenths in the 200 free, Carson did the same for the 100 breast, and Newton dropped 2 seconds in the 100 breast! Both Kate and Carson had difficulty swimming faster in the 200 IM at finals, but put out a great effort.  Saturday began with the 50 free. Coach Margaret Greer made an appearance for this event and did very well. Highlights include Amanda Houston getting a best time, Lucianna getting scratched into finals, and Victor Deng getting his first ever sectional cut and breaking a long standing EBAT record held by one of EBAT’s fastest swimmers ever. The 200 breast landed Carson and Newton a place in Consolation finals with best times for both of them. The 400 free was an awesome event for Amanda and Kate as they both made finals, Kate in Consolation finals and Amanda in bonus finals. That evening we had 6 EBAT swimmers in 7 events and everyone did a fantastic job. Lucianna squeeked into finals in 24thplace for a 2ndchance at nailing her breakout. She achieved that, but swam a tiny bit slower. Victor, on the other hand, dropped from a 25.9 to a 25.5 and almost won the heat!  Carson and Newton both dropped time in their 200 breast. Newton dropped almost 1 second and Carson dropped 4 seconds getting 2ndplace in the heat by .05 of a second. Very close race! The last event, the 400 free, was probably the most exciting as Kate dropped 10 seconds off of her morning swim, broke another EBAT record, and just missed her sectional cut.  Amanda Houston swam a great race and dropped 1 second from what she had done that morning.  Saturday’s finals were spectacular!! Sunday, our final day, was Newton’s 200 back and Amanda, Lucianna, Kate, Carson, & Victor’s 100 free.  Great swims for all. Victor and Lucianna made finals, while Carson and Kate were 1stalternates.  Lucianna was able to come back and swim just a little faster than the morning. Victor did the same, but also got his 2ndsummer sectional cut as well. Great job to all!

This was a great meet for all. The kids got some experience in battling very hot weather, hotel rooms, eating out, swimming finals later in the day faster that earlier in the day, etc. These are skills that take practice and I would say the EBAT swimmers did an outstanding job! I also noticed that they had lots of fun!