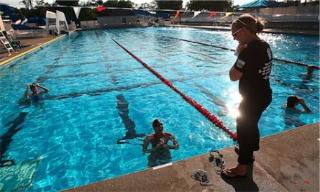 Ishimaru and several other DCST swimmers said they felt that their practices in the heat were something that had to happen to prepare them for their next challenge.

Ishimaru and the rest of the team face their biggest event of the summer: the YMCA Long Course National Championship in Atlanta. The meet runs from today through Friday. Ishimaru hopes that the obstacles that the team had to overcome at home will help them on the road.

“The practices that were in the morning were bad, but when the heat was added to that, it was absolutely horrible,” Ishimaru said. “I think it will help everyone out in nationals, though.”

The coed team, led by coach Brian Bickner, consists of more than 180 swimmers between the ages of 6 and 18. The team features 10 different age and skill level groups.

The team has experienced a good amount of success in past years. The trend continued this year, specifically with the nationals group, which is competing at the highest level to qualify for Olympic trials.

The past school year brought a lot of success for DeKalb/Sycamore High Schools co-op swim team. Ishimaru, the Daily Chronicle Boys Swimmer of the Year who will swim for Illinois-Chicago, heads the DCST team that took first place in the Northern Central Illinois Swim Conference by a wide margin.

The swim team has finished as NCISC champions for the past 12 years and expects to take the same intensity that helped win the conference championship to nationals.

“I’m excited to see how everyone does,” Ishimaru said. “But mostly I’m looking forward to having a good time.”