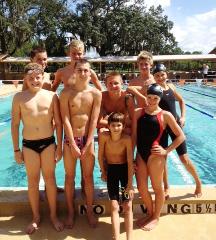 Tampa Bay Aquatics (TBAY) swim club was the top scoring Bay area swim club at the recent Florida Swimming Age Group Championships held at the University of Florida aquatic center in Gainesville. TBAY finished third in total points scored, winning both the 10 and Under and 11-12 Girls age group divisions and finishing 3rd in the 13-14 Girls and 4th in the 13-14 Boys.

TBAY was led by George (Wes) McGovern swimming in the 13-14 year old boys division. McGovern was the high-point winner in that division and broke two meet records winning the 200 Free in record time and winning the 400 Free with a time of 4:03.87; smashing the previous record set in 2004 by 2.67 seconds.

Christin Rockway swimming in the 11-12 year old girls division was the runner-up in total points for her division and also won the 200 Individual Medley in a record time of 2:25.63; breaking the previous record set in 2007.

TBAY Brandon Head Coach Dave Gesacion said, “This was the best championship experience I have been associated with. Every one of our swimmers swam smart, and did everything they needed to do to swim best times, all while practicing great sportsmanship.”

Florida Swimming is made up of 89 swim clubs throughout the State with more than 460 coaches and more than 9600 athletes. Tampa Bay Aquatics is a registered USA Swimming and Florida Swimming club with a tradition of developing some of the Bay area’s top young swimmers. If you would like more information about TBAY Brandon or are interested in contacting Coach Gesacion, the team’s website is www.tbaybrandon.org.