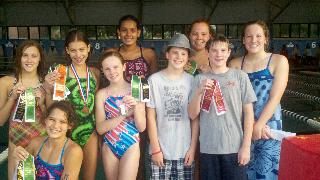 The 2012 summer Long Course season concludes in the next few weeks. NFS swimmers are competing in end-of-season championship meets across Florida and in Texas.

Corinne Priest, age 17, has been chosen from among the best swimmers in Florida to compete next week at USA Swimming’s Southern Zone Championship in Rockwall, Texas. Corinne joins other chosen swimmers to make up the Florida Zone team. The team’s manager this year is our own, NFS Coach Erin Crabtree! Corinne and Coach Erin will be flying to Texas in the next few days for the week-long meet where Florida competes against champion teams from across the Southern States of the country.

Senior swimmers David Li and Mel Nash II have qualified for the Florida Long Course Senior Championships and will be heading to Sarasota this weekend for their championship meet of the season.  This meet, which features qualifying standards that must be met in each event, will enable Mel and David to compete against some of the strongest older swimmers in Florida, including collegians training in the state for the summer.

“David and Mel have worked hard this year,” said Coach Mel. “I’m anxious to see these guys go down there and race.”

One enjoyable diversion for many Jacksonville area swimmers during the summer is the River City Swim League, an 18-team summer swim league that features weekly dual/tri meets, a 6&u championship meet, and a three-day championship extravaganza for the 7-18 year old swimmers.

The RCSL offers a more casual and social-oriented atmosphere that attracts a large number of first-time and summer-only swimmers in addition to seasoned club swimmers. A number of North Florida members will be participating in the Championship meet at Cecil Field in Jacksonville from July 27-29.

“We support the swimmers’, especially the younger swimmers’, involvement with their local RCSL teams,” Coach Carol Nash explained.  “It gives the kids a chance to compete with friends and classmates who don’t swim year-round and it’s a fun entry into swimming. Many of our NFS swimmers got their start in Summer League.”

The RCSL championship provides an alternative championship meet for NFS swimmers. While NFS does not sponsor a RCSL team, NFS swimmers can be found representing a number of the teams, with the largest concentration being on the Wahoo team, which hosted its’ RCSL meets at the NFS home facility this summer.

"Best of luck" to the families participating at RCSL champs this weekend.  We know you will make your NFS teammates proud!  Coach Justin said "After all of the hard work in practice this summer, these swimmers are ready to do well at the end of the season."

FLAGS (Florida Age Group Swimming) swimmers have just returned from a successful championship meet in Gainesville. “FLAGS is an exciting meet,” said Coach Erin. “We had fun as a team, our swimmers did really well and they learned a lot for next time!” North Florida Swimming is quickly earning the reputation of sending a highly competitive group of qualifiers to FLAGS who compete as both individuals and in team relays. “At NFS our goal for the FLAGS championship is to continue to improve our overall team standings while remaining true to our philosophy of age-appropriate training and long term development,” noted Coach Mel Nash.  “We want FLAGS to be part of our swimmers’ journeys, but not the final destination.”

The coaching staff, parents, and teammates of these swimmers representing NFS in the coming meets wish them a successful and enjoyable experience!