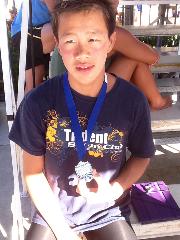 After 5 Days in Mission Viejo, the Trident Swim Club swam a very solid meet.  With a small team of 16 members, the Tridents were able to finish 7th Place in the Combined Team Scores (both men and women).

Edgar Chin was a triple Gold Medalist in the meet winning the 100 Breast, 200 Breast and 400 Medley Relay.  What was impressive in the 100 meter breaststroke was the fact that there were 4 Tridents, Michael, Edgar, Alec and Ryan all competing in the Final Heat.   Trident claimed a 1-2-3 Medal Sweep. And in the 15 and over Timothy Chu scored points in the Consolation Finals of the 100 Meter Breaststroke.

Other Tridents competing in the meet were Rachael Ramos, Kelly Prawira and Joyner Cai.  This was a successful meet.  Congratulations to all!!!!!  A job well done.