Florida Swimming Swimmers of the Year 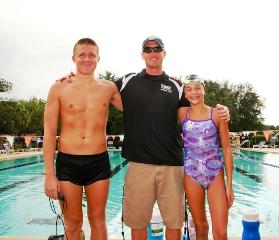 McGovern of Lithia and Rockway of Valrico both swim under Coach Dave Gesacion for Tampa Bay Aquatics (TBAY Brandon) and practice six days a week at River Hills Country Club in Valrico. Both swimmers set FL Age Group Championship records in Gainesville this summer. Coach Gesacion said, “To have two swimmers from the same squad named FL Swimmers of the Year is a testament to our team’s philosophy and training and to the dedication that our swimmers put into the sport. I’m extremely proud of Wes’ and Christin’s accomplishments, but even more proud that both would quickly say, that the support of their teammates and parents and that of our entire organization allow them to reach this high level of achievement. That is a true measure of success.”

Tampa Bay Aquatics is celebrating the 10th anniversary of its founding and the 3rd anniversary of its expansion into the Brandon/Valrico area. The TBAY Brandon branch fields a squad of 40 competitive swimmers with an additional 25 pre-competitive and early competitive swimmers. Gesacion added, “We have accomplished a lot of great things since expanding locally. Being able to partner with a facility like River Hills C.C. helps us build the “championship behavior” that we work to instill in all our swimmers.”

Each year, Florida Swimming’s House of Delegates presents the Swimmer of the Year Award, to the athletes judged as the most outstanding swimmers of the year.  Florida Swimming is made up of 89 swim clubs throughout the State with more than 460 coaches and more than 9600 athletes. Florida Swimming (www.floridaswimming.org) is one of 59 Local Swimming Committees that make up USA Swimming, the governing body of swimming in the U.S., from club teams to the National squad that represented the U.S. at the London Olympics.