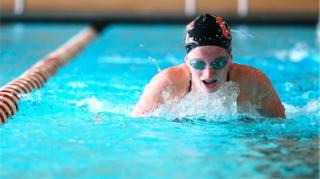 Jensen Keck knew coming into Saturday's sectional meet that she had a chance to qualify for state.

Going through practice and tapering her workouts, the DeKalb / Sycamore co-op freshman felt strong in the breast stroke, typically her best event.

"We had done brokens this week and today was actually a very good day for me," Keck said. "This week I felt like 'Yeah, I can do it.'"

Keck qualified for the state meet in the 100-yard breaststroke, taking fourth place at the St. Charles North Sectional with a time of 1:07.81, under the state qualifying time of 1:08.22.

"She went out in that first 50 [yards] extremely fast and she was able to have the endurance to come back in the second 50," co-op coach Leah Eames said. "She wanted that more than anything."

Keck’s previous personal best in the event was 1:10.5.

“[My goal] was really to do my best in [100-yd breast stroke] and I was so happy to make the cut,” Keck said. “I dropped about three seconds today.”

The co-op's first relay of the meet - 200 medley - set a new school record. Freshmen Alexa Miller, Kylie Olson, Bailey Flemming and Keck finished in 1:52.02, dropping nearly six seconds off their season best. The varsity record was set back in 2006.

Individually, Miller finished fourth in the 200 freestyle and 7th in the 100 butterfly. Olson took third place in the 100 back, tying a school record by finishing in 1:00.33. The state qualifying time was :59.70.

“I dropped time and it was a good swim,” Olson said. “I was trying really hard for that so it was a disappointment.”

Overall, the co-op finished fourth as a team with 143 points.

"We have a deep team especially compared to the last few years," Eames said. "Placing fourth was a lot higher than I expected."

Jared Birchfield contributed to this report.