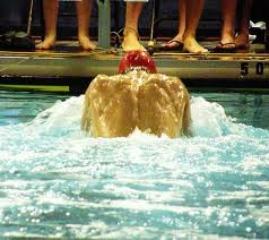 Hampshire senior Josh DeDina scoured the Internet a couple of months ago searching for just the proper match.

DeDina needed a college that offered agriculture business as a major and had a swimming team. It was not the easiest combination to find.

“If I didn’t swim in college, I would have felt like I wasted all those years,” DeDina said. “I wanted to go somewhere where I could get some [scholarship] money [to swim]. It takes so much dedication to do this.”

DeDina, who swims for the Jacobs District 300 co-op team, found South Dakota State, an NCAA Division I school in Brookings that offered agriculture business and has a men’s swimming team. The Jackrabbits’ coaching staff called him back promptly, DeDina visited the school a couple of weeks later and signed his NCAA national letter of intent with South Dakota State on Wednesday.

Wednesday marked the early signing period for most sports. Football, soccer and cross country and track and field athletes sign in February. Others who are accepting scholarships to NCAA Division I and II schools can sign until next Wednesday.

“I filled out a questionnaire [online], put in my [swimming] times and emailed it,” DeDina said. “They called me the next day. It surprised me, but I was really happy. I couldn’t believe it.”

“As a freshman, I just missed the cut in breaststroke by a second,” DeDina said. “I’m really goal-oriented and I really wanted to make it to state after that. Last year, I was in the top 25 [in breaststroke] and I was surrounded by an extremely talented group of guys.”

DeDina said swimmers such as Alex Elston and Ryan Quinlan really pushed him to be his best. DeDina was looking at Eastern Illinois and D-III schools Wisconsin-Whitewater and Monmouth. When South Dakota State’s coaches were interested, the choice became much easier.

“I like to interact with people,” DeDina said. “I wanted to go into agriculture business so I could do something like run a feed store or be a field agent and work with farmers.”