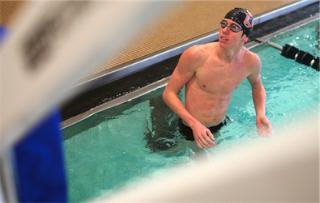 DeKalb-Sycamore co-op swimmer Marc Dubrick watches for the clock to come around during practice Feb. 7. Dubrick and his teammates will compete in the St. Charles East Sectional today (Kyle Bursaw – [email protected])

DeKalb-Sycamore co-op boys swimming coach Leah Eames knew at the beginning of the season she was going to have fun making the lineup each week.

Eames would tweak her lineup in a number of different ways, ensuring the co-op matched up the best it could depending on the strengths and weaknesses of the team’s opponent.

“I kind of realized how deep our lineup was for all of those events and how versatile these guys are,” Eames said. “It’s been nice all year to switch things up.”

That depth and versatility led the co-op to an undefeated season in dual meets and a second-place finish in the conference tournament to Oswego, winning the swimming portion of the meet, but losing out on the overall title because it lacked a diving program.

However, now that the postseason has arrived with today’s St. Charles East Sectional, the lineup changes Eames enjoyed now became a struggle.

“This was one of the toughest lineups that I had to fill,” Eames said. “Our varsity roster this year is huge and we’ve needed every single one of those guys to win every single meet. You want to be able to give those guys a chance to swim at the sectionals.”

Eames’ ultimate goal is to get as many swimmers as possible to the state finals. At the beginning of the season she thought one or two swimmers had a chance. Daniel Hein entered the year as a highly touted freshman and already has broken a couple varsity records while junior Ryan Schultz qualified for state in the 100-yard breaststroke as a sophomore.

Schultz already has swam well under the state qualifying mark this season and won’t be fully tapered going into the sectional. This year, he’s hoping to get a good seed and make it to Saturday’s finals.

“That’s definitely my goal this year,” Schultz said. “It’s definitely possible. It’s just a matter of how much I can drop between now and then.”

But now at the end of the season Eames said the number of swimmers with a chance to get to state has grown and includes senior distance swimmer Marc Dubrick, who also was the Daily Chronicle Boys Cross Country Runner of the Year. Dubrick is close to the state qualifying time in the 500 freestyle.

“I don’t start swimming for high school as soon as I should,” Dubrick said. “It takes me a little bit longer to get in shape, but I got in shape really quick. I knew this season was going to be fun right away. It all came together.”

Schultz, Dubrick, Hein and Dylan Powers will combine to swim the medley relay, another event in which the co-op is close to the state qualifying time.

With everyone finally rested, Eames said it wouldn’t be a surprise to see the co-op with a large contingent in Winnekta next weekend.