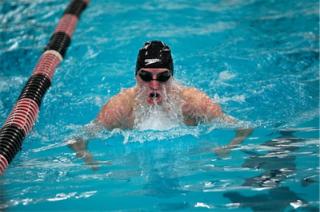 SAINT CHARLES – Freshman Daniel Hein didn't think there was any way he could top his program record-setting time of 50.97 in the 100-yard butterfly at the conference meet two weeks ago.

That assumption was as far from the truth as the chasm between the DeKalb-Sycamore co-op swimmer and his nearest competitor in the 100 butterfly at Saturday's St. Charles East Sectional.

Hein annihilated his record with a time of 49.70, winning the race by over one second. Four other swimmers swam under the qualifying time of 52.87 in the 100 butterfly, making the race the most competitive of the day.

"I definitely surprised myself in this meet,” Hein said. “I was just in shock after that … I get way more pumped up for this kind of meets than normal meets. I could tell it was going to be a good day as soon as I got here.”

No freshman placed higher than eighth at last year's state meet, but Hein's time in the 100 butterfly was the third fastest in the state in the event. He also finished second in the 100 backstroke with a time of 51.77, the 12th fastest at any sectional.

His teammates weren't surprised about his record-shattering performance.

“The whole time, we were like, 'Daniel, we know you can go faster, we believe in you,'” junior Ryan Schultz said. “He's so humble. Coming into the day, he wasn't sure he was going to beat his time from conference, even though we knew he would.”

Hein will be joined by several members of the deepest DeKalb-Sycamore swim team coach Leah Eames can remember. He qualified as a member of the 200 medley relay, along with Schultz, senior Marc Dubrick and sophomore Dylan Powers, and freshman Jacob Bjork and Schultz qualified in the 100 breast stroke, finishing second and third.

After not tapering some of her swimmers fully for Saturday's meet, Eames is expecting some dramatic time drops at next week's state meet in Winnetka.

“It's really exciting to have the number of guys we have qualifying,” Eames said. “None of the guys are 100 percent rested for today. I'm actually hoping for bigger and better things at state.”

Eames has particularly high hopes for Hein, who shattered his own school records in both the 100 butterfly and 100 backstroke, breaking each by over a second.

“It's fun to see him swim, because at this point there's no boundaries, no limits,” Eames said. “Right when you think he's peaked and he can't go any faster than that, he just kills it even harder. It's been a fun year. That wasn't the end of it for him. Even though he might not believe it, I honestly think he can get in there and go faster.”

If he swims any faster, a state championship is within his grasp, an incredibly rare feat for a freshman swimmer.

Hein, himself, is only starting to believe he can push his limits even further.

“I really hope I can improve,” Hein said. “Maybe it's like conference again. I didn't think I could beat my conference times, but maybe I'll beat them at state.”