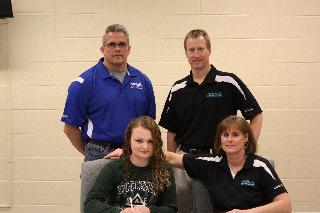 Congratulations to Kierstin Page for signing on to Delta State University as their premier recruit for the upcoming 2013/14 season!  Kierstin leaves in her wake a legacy of 16 (yes, sixteen!) MSA short-course and long-course records for the Senior Girls age group, and she joins Delta State as easily their fastest Backstroker, not to mention fastest in 200 Fly and 400 IM.

Kierstin’s future coach is very excited that he has landed such a high-caliber recruit.  He sent this message immediately after she visited Delta State on her recruiting trip: “I wanted to let you know we enjoyed having Kierstin this weekend at Delta State.  Great kid and fit in very well with the team while here.  We made her a strong offer!!"

Now that Kierstin has signed her papers, here is an excerpt from the press release, fresh from the quill of her new college coach:

“The great thing about her as an athlete is that she is very diverse in the events she can swim.  She has a lot of areas where she can contribute on our team and so that being the case, she's going to have an immediate impact on what we do during her freshman year.  She has been continuing to improve during her senior season in every event this year.  Kierstin was very impressive during the recruiting process and her goals in the classroom and in the pool make her a perfect fit for our program.  She has a terrific attitude towards swimming that will rub off on the rest of the team and make us better as a whole.”

Be sure to congratulate Kierstin and wish her well in her career as a “Statesman”!