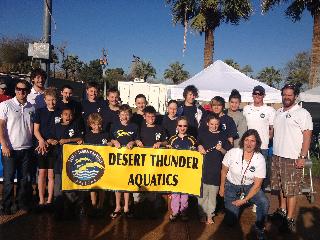 The Desert Thunder Age Group Team, under a mix of extreme weather elements, performed tremendously at the Arizona Age Group State Championships.  Of our 17 athletes, 14 made it back for at least one finals swim.  The meet was highlighted 7 team records, 3 swimmers picking up their first Far Western cuts, 2 swimmers finishing on the podium, 6 swimmers in Top 8 Finals, and 8 swimmers with Top 16 Finals swims.  Overall the team left the meet with 64% personal best times.

Archie made his first visit to the podium two years ago in the 500 Freestyle as a 10 year old.  This time he returned to the podium with a 3rd place finish in the same event for 11-12 boys, but only 1 second shy of taking the title.  This particular race had everyone at the pool on the edge of their seats as the top four boys battled for the full five and a half minutes to see who would get their hand on the wall first.  All the boys crushed their best times, including Archie, who beat his best by over 10 seconds.  Archie also tied the 11-12 boys’ team record in the 100 Freestyle and broke his own team record in the 100 IM.

The seventh and final team record came in the final Desert Thunder race of the meet when the 11-12 boys’ team of Archie, Vincent, Dylan, and Tanner crushed the 400 Medley Relay team record by almost ten seconds!

Finishing Top 16 were Nathan Calmese, Sierra Bigelow, Corinne Komlodi, Zach Larntz, Kyle Gundersen, Marina McInelly, Edda Anderson, and Tanner Komlodi.  Nathan, Sierra, Marina, Edda, and Tanner all provided much needed depth for our team scoring while racing to best times.  Corinne, Zach, and Kyle made their first visit to finals in what was also their first ever State Championship meet with individual events.

Finn Lynch dropped almost a second to cap extraordinary progress on his 100 Fly this season while Joseph Dugay and Andrew Li made their inaugural Age Group State Championship appearance in the 100 Fly and 50 Breast respectively.

Congratulations and thank you to all the Desert Thunder swimmers for great performances.  Thank you to the parents for your great logistical support (and team area humor).