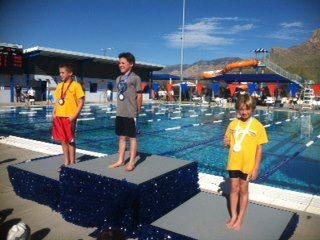 The 8 & Under team represented Desert Thunder Aquatic Club and their SWIMkids USA roots well with outstanding performances at the 8 & Under Arizona State Championships.

Joseph Dugay led the way by breaking four team records!  Dugay demonstrated his prowess in the Medley discipline by breaking the 25 yard team records in every stroke!  He also finished on the podium with a 3rd place finish in the 8 year olds' 25 fly.

Morgan Nunez stepped up for the team and himself with 100% best times in his ten individual events.  The majority were top 16 finishes.