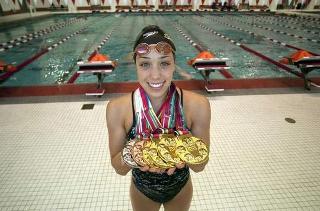 WORCESTER— Ana Castellanos was about 4 years old when her mother began teaching her how to swim. She did not, as the adage goes, take to water like a fish.

It was more along the lines of oil.

“I hated swimming as a little kid,” Castellanos reminisced Tuesday with an ever-present smile.

“She was always crying,” Claudia Castellanos concurred. “She didn't want to go in the water and would sit on the stairs. I thought, 'She's never going to like it.' ”

For one thing, she enjoyed spending time with her older brother, who loved splashing around in the pool. For another thing, her mom wisely insisted she learn to stay afloat.

And what do you know. That early turbulence gradually gave way to calm waters. Taking formal swim lessons with other kids at the Greendale YMCA turned out to be fun, and racing for the club's Gators team was exciting.

“After I started winning and getting better I fell in love with swimming,” Castellanos, now 16 and a junior at Wachusett Regional, said. “It felt better to be in the water than anything else.”

Now, you're as apt to find Castellanos in the water as on dry land. A member of the highly competitive Greenwood Swimming team, she practices nine times a week at WPI's sparkling Sports & Recreation Center, the sessions spanning six days and totaling nearly 24 hours.

It's a time-consuming commitment made with the purpose of achieving the lofty — but eminently reachable — goal of representing her native Honduras at the 2016 Summer Olympics in Rio de Janeiro.

Castellanos was born in Central America, but moved to Central Mass. as a 2-year-old when her dad, a doctor who was born in the United States and raised in Honduras, relocated to Auburn for business reasons. The family moved to Holden prior to her entering seventh grade.

It was on a return trip to Honduras to visit family and friends four years ago when local swim officials took note of Castellanos while she was at a meet with her aunt. She accepted their invitation to represent her former homeland internationally and has since competed in China, Puerto Rico, El Salvador and, most recently, Costa Rica.

Next on the docket are the World Junior Championships in Dubai in August.

Castellanos, who specializes in the breaststroke and individual medley, won six medals at the 10th Central American Games last month in San Jose, Costa Rica. In addition to four golds, she swam away with a silver and a bronze.

“I think it's a great opportunity,” Greenwood Swimming coach Don Lemieux said. “Anyone who is on the United States national team or Olympic team basically has to be pretty much top five in the world. So this gives kids like Ana a chance to represent her country and travel all over the world.”

One of Castellanos' teammates at the Central American Games was 15-year-old Julimar Avila, who lives in Weston.

The one trip that Castellanos regrettably missed was to London for the 2012 Games. Honduras is only allotted one spot for a female swimmer at the Olympics, and while Castellanos arguably had the most impressive résumé she wasn't selected due to “politics” related to her living abroad.

If Castellanos can make it to Brazil, she would join her dad and mom as Olympians.

Plutarco and Claudia Castellanos swam for Honduras at the 1992 Games in Barcelona, two years before they were married. Plutarco also competed in Seoul in 1988.

“It was wonderful,” Claudia Castellanos recalled. “We didn't place, but it was such a good experience and it's the highest point you can reach as an athlete. To go to an Olympics is great. It was beautiful and the environment you're in is awesome.

“If Ana could make it next time, that would be great.”

An honor roll student at Wachusett, Castellanos is interested in studying sports medicine or physical therapy in college. Although she hasn't started looking at schools, Lemieux said his latest pool protégé is a Division 1 talent should she choose to compete at that level.

To think it wasn't that long ago Castellanos had an affinity for avoiding water. And now?