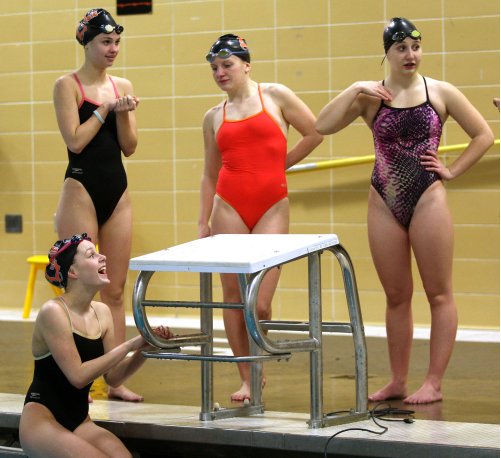 DeKalb/Sycamore sophomores team up for trip to state &#64257;nals

DeKALB – The few seconds between touching the wall and seeing the time felt like an eternity to Bailey Flemming.

The DeKalb/Sycamore co-op sophomore had finished the last leg of the 200-yard medley relay in third place Saturday in the St. Charles East Sectional, just missing out on the last state qualifying spot given to the top two finishers. But if the relay’s time beat the Illinois’ automatic qualifying standards, the relay was headed to the state meet Friday at New Trier.

“It was so nerve-racking, but then I looked up at [my teammates] and they were cheering so I knew we got it,” Flemming said. “It was incredible. It was a great feeling.”

The relay team of sophomores Flemming, Jensen Keck, Alexa Miller and Kylie Olson clocked in at 1 minute, 50.12 seconds, a mere four-hundredths of a second ahead of the standard set at 1:50.16.

As freshmen last year, the four were new to high school swimming. Although they entered with a lot of notoriety for their accomplishments at the club level, the four never had felt the pressure of a sectional meet.

At last year’s sectional, the four still managed to set a school record in the medley relay at 1:52.05, but finished a couple seconds off the automatic qualifying standard.

“I think last year we finally realized that it was possible for us to achieve it,” Miller said. “So then this year we really focused on what we needed to do and we all talked about how we were going to achieve it and the goals we needed to set in order to make it.”

Another year of training under co-op coach Leah Eames saw all four continue to get faster. The team, once again, went undefeated in dual meets and had an impressive showing at conference.

But even with a full taper, they weren’t certain that a state berth was going to happen in the relay.

“We knew we could do it, but we knew it was going to be close either way,” Miller said. “We just had to try our hardest and push ourselves, and we got it.”

Miller and Flemming both noted that qualifying for state in the medley relay, the first event of the sectional meet, helped relax them for the rest of the day. Keck, who got a taste of the state meet last year after qualifying in the 100 breaststroke, again qualified individually in the same event. Olson also managed to get through to state in the 100 backstroke.

The state meet will be a new experience for three of the four sophomores, but Flemming said having the four of them there together will make it easier to adapt to an environment that can be overwhelming to those who haven’t been there before.

“I’m really nervous, but I’m really excited,” Miller said. “I’m so happy to be swimming with these girls and I can’t wait to swim with them at this meet.”