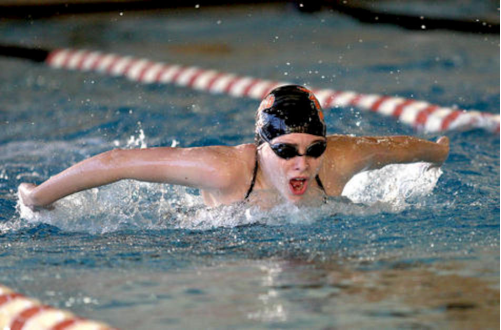 Freshman swimmer fills in for sister at sectionals

DeKALB – For the last three years Colette LeBlanc had been hearing stories about the DeKalb/Sycamore co-op swim team.

Her older sister, Sam, now a senior at DeKalb, would come home and talk about the team, training and out-of-practice bonding that happens with her fellow swimmers.

"We spend so much time together that it's impossible that we wouldn't become really close friends," Sam said. "We're really a very different group of personalities so it's interesting that we all come together."

This year Colette, in her freshman year at DeKalb, finally got her chance to join and the two sisters have spent the last three months swimming together and racing against each other.

Swimming has become a family sport for the LeBlancs since they moved to DeKalb from Colorado three years ago. Sam picked up the sport when she was younger and joined the high school swim team as a freshman. Colette and the two younger LeBlanc sisters, Megan and Antoinette, began club swimming at the DeKalb County Swim Team and their dad even became the club's head timer.

Colette said swimming with Sam on the high school team has been fun and she's been able to adapt to the varsity team quicker with her advice.

"[Sam] told me to keep going, even when I get tired," Colette said. "She's really good at encouraging our whole lane. She's just one of those people that likes to cheer other people on."

DeKalb/Sycamore coach Leah Eames noticed the similarities between Colette and Sam from the first day of practice. Eames Although Eames hadn't been around Colette, she said her personality, mannerisms and even work ethic matched that of Sam.

"They are definitely two people made from the same mold," Eames said. "Even their strokes are actually very similar in some aspects, especially in the freestyle."

But as DeKalb/Sycamore trained in preparation for the postseason, which starts this weekend, Sam had an unfortunate decision to make regarding her extracurricular schedule. Also a member of DeKalb's choir, Sam was forced to choose between the St. Charles East Sectional swim meet and the Illinois Music Education Association's Junior/Senior Festival for DeKalb's state district, both occurring  Saturday.

"I was really upset about it. [IMEA is] usually the weekend after sectionals, but this year it happened to coincide," Sam said. "You only get to do this IMEA once a year and I didn't really have a shot at swimming state, so I figured there were plenty of meets, but there's only one of [IMEA]."

In her place, Colette will get the opportunity to swim the 500-yard freestyle at the sectional, giving her experience that many swimmers don't get until they are upperclassmen.

As far as words of encouragement Sam would give Colette in preparation for Saturday, Sam said she'd be fine.

"She swam a lot of big meets and she's really prepared," Sam said. "She's going to do really well in that. I think she's got it covered."