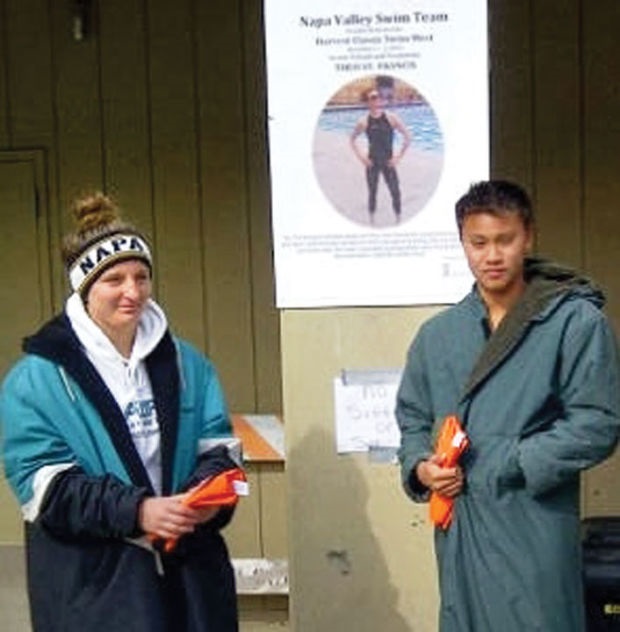 St. Francis is an amazing and talented young man who, during his Ocean Engineering Freshman Pre-Orientation Program at Massachusetts Institute of Technology, was involved in a serious accident that caused damage to his cervical spine.

To honor St. Francis’ signature event, the 200-yard backstroke, the NVST awarded Team Theo T-shirts to the winners of both the girls and boys open 200 back events — NVST’s Megan Minor and SFRP Rossi’s Jordan Vu. See https://www.youtube.com/watch?v=LHfDRvuMD6U for a special video.

The St. Francis family’s expenses are mounting because of medical bills not covered by insurance, unexpected travel and other costs, and a home retrofit to be constructed. Those who wish to send support directly can contribute to the Theo Fund, set up by friends to help him and his family, with a check payable to “Theo St. Francis Special Needs Trust” and mailed to the Fund Co-Administrator: Ann Morrissey, P.O. Box 1427, Ross, CA 94957. One-hundred percent of the contributions will go toward covering the expenses related to his care and rehabilitation that are not covered by insurance.

In the 8-and-under boys division, Gianni Izzi achieved new A times in the 25 back and 25 fly, and William Tokar achieved a new A time in the 25 free.

In the boys 9-10 age division, Michael Izzi achieved best times in the 100 and 200 free, and Matthew Larsen achieved new A times in the 50 free and 50 back and swam to seven best times.