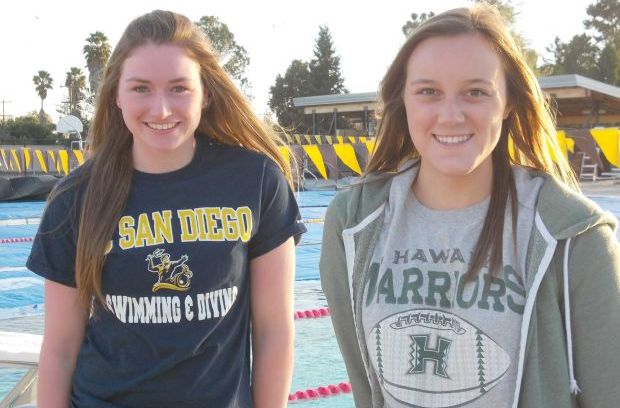 There were balloons and posters and even a cake.

Family, friends, teammates and coaches went all out to make the national letter-of-intent signing ceremony on Nov. 15 for the Napa Valley Swim Team’s Alex Swanson and Haley Murphy as special as possible.

Swanson, a senior at Vintage High School, signed with the University of Hawaii.

“They have definitely earned it,” said Asher Green, head coach of the Napa Valley Swim Team, a year-round USA Swimming program which offers competitive swimming. “They’ve been involved in swimming for a long time and the last several years they’ve just continued to increase their commitment to it.

Swanson and Murphy train and compete all year long. They agree that swimming teaches life lessons, in particular time management.

“You develop the hard work and the determination from swimming to get anything done,” said Murphy.

Swanson is in her 12th year with the NVST, training daily and racing in meets throughout the year. She is entered in the Husky Invitational on Dec. 6 in Federal Way, Wash.

“It’s always been my dream to go to a Division I school and be able to swim on scholarship,” Swanson, a Napa resident, said last week. “Now I’m finally achieving my dream. It’s a lot of hard work, a lot of tears, a lot of laughs. But it’s been the best experience I could have.”

She took a recruiting trip to Hawaii, visiting the school at Honolulu and touring the Duke Kahanamoku Aquatic Complex, which serves as the home for Hawaii’s swimming and diving and women’s water polo teams. The facility, located on the school’s lower campus, includes a 50-meter training pool and a separate 25-yard competition and diving pool. The DKAC also features newly renovated locker rooms and a conference room. The competition pool doubles as the diving facility, which has two one-meter and three-meter springboards.

Hawaii is a member of the Mountain Pacific Sports Federation.

“I just felt like I fit in there. I felt like that’s where I was supposed to be,” said Swanson, who carries a 3.8 GPA with plans to major in psychology. “I really liked the coaches.”

Swanson, the senior class director of activities, has received physical therapy for a shoulder injury.

“She’s got tremendous perseverance,” said Green. “She’s one of the kids who loves the sport and has hung in there through some tough times. She’s very competitive.

“She’s one of these swimmers who, when it’s time to go fast, for a peak meet, she’s always on the money. She’s got some versatility.”

Swanson qualified this past summer for the Pacific Swimming Far Western Age Group Long Course Championship Meet at the Frank Fiscalini Swim Center in San Jose. This is an extremely competitive age group meet, where over 1,500 swimmers from over 130 teams from California, Arizona, Colorado, Nevada, Oregon, Canada, British Columbia and Mexico race. Swimmers must achieve stringent time standards in order to qualify.

“I love the excitement of racing and I love the friendships you form with your teammates and your coaches. It’s like a family,” said Swanson. “It’s exciting and it teaches you a lot of life lessons.”

She was Vintage’s MVP last year.

“I’ve put my heart and soul into the sport,” Murphy said. “ I’m really ready to have another new family and to be able to experience college swimming. Everyone says it’s so amazing.”

Murphy and Swanson swam on the Crushers’ 200 medley relay team that placed 12th and was fifth in the 200 free relay.

Murphy’s top events are the 50 freestyle and 100 freestyle. She also swims breaststroke and is working on developing the 200 free into her races.

A few years ago, Murphy met with Green, deciding that she wanted to be a significantly more serious swimmer.

“And she committed to it,” said Green. “And when she kind of turned that corner, training better at the workouts, she really broke through in the last couple seasons.”

Murphy had a lifetime best time in the 50 free at the California/Nevada Sectional Championship in Santa Clarita over the summer. The Senior Sectional meet (also referred to as the Speedo Champions Series) is held twice annually, one time each in the long course and short course seasons, and is the championship meet for the fastest swimmers throughout California and Nevada.

“It’s always been my dream to swim in college,” said Murphy, who carries a 3.8 GPA and has been with the NVST for five years. “Both of my parents swam in college. I always wanted to be like them and achieve my own goals.”

Her parents, John and Julie Murphy of Napa, swam at Cal State East Bay in Hayward.

UC San Diego is an NCAA Div. II school in La Jolla that is a member of the Pacific Collegiate Swim & Dive Conference.

“I love the school, I just felt at home,” said Murphy, 18. “I love the swim team. The academics are really excellent. I wanted to find a good balance between academics and swimming, which UCSD has. I like the coaches a lot. They are really supportive of their athletes, in both school and swimming.”