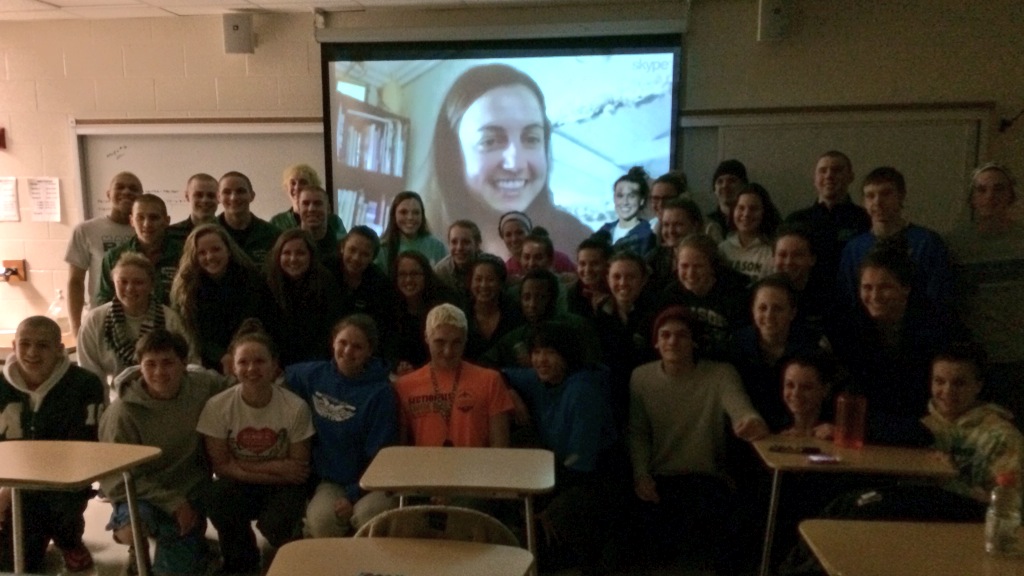 Six-time Olympic medalist Rebecca Soni crashed the end of today’s Mason Manta Rays practice (via Skype)!   As the older Manta Rays head into their championship season starting tomorrow, they were treated to an inspirational talk with the world record holder.  She talked about controlling nerves, race strategy, how to handle yourself at a big meet, what to eat, along with some lighter stories about seeing the Queen of England in the dining hall at the London games. The swimmers had many great questions for Rebecca and left the talk not only informed, but inspired!

Since making her Olympic debut in Beijing in 2008, Soni has been an integral member of U.S. Swimming, winning three gold and three silver Olympic medals. She is the only back-to-back Olympic gold medalist in the women’s 200m breaststroke event after winning in both 2008 and 2012, and in her final Olympic Games in London, Soni became the first woman ever to break two minutes and 20 seconds in the 200m breaststroke event.

“Before I move away from swimming too much, I want to take the time to give back,” said Soni. “The swimming community has become my family and I want to do my best to inspire the next generation and to share some of the things I’ve learned.”   Soni’s new endeavor, The Atlas Ventures, created alongside fellow World Champion Ariana Kukors, is a lifestyle company that aspires to give back, inspire healthy attitudes and encourage exploration. The Atlas Ventures will kick-off this spring as Soni and Kukors launch “Practice Crashers” and “crash” unsuspecting swim teams at practice. They will also lead Peak Performance Workshops to teach athletes from all sports tools that go beyond physical training.