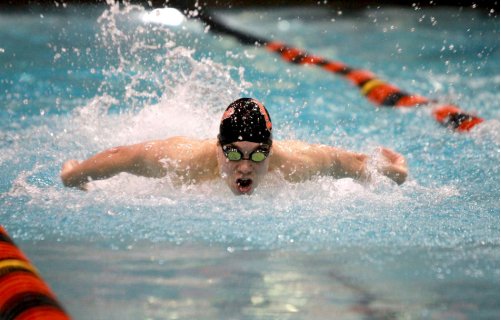 After failing to qualify for the finals as a freshman, Hein made it through in both of his individual events and one team relay at Evanston High School.

Hein, who will be seeded fifth in the 100-yard backstroke championship finals after finishing in 50.87 seconds, competed in the sixth of eight heats. Winning the waiting game only sweetened his celebration.

“Yeah, definitely really nerve-racking,” Hein said. “Only so many guys can get ahead of you, and all you can do is watch.”

Hein finished the 100 butterfly in 50.68 seconds, placing in a tie for ninth and breaking his own varsity record. He’ll swim in the consolation finals today.

“He’ll join an elite group of guys. He’s one of five guys that have ever [qualified for the finals],” co-op coach Leah Eames said. “He’s joining a short list of elite swimmers out of DeKalb.”

DeKalb-Sycamore started the meet with its 200-yard medley relay team placing 10th and qualifying for today’s consolation finals. The relay team of Hein, Ryan Schultz, Dylan Powers and Holden Mackey set another varsity record with a time of 1:35.82 and became the first relay in school history to make the finals.

“They want to lower the time even more tomorrow,” Eames said. “There is still room for improvement and they all have things they want to work on tomorrow.”

In the 100 breaststroke, Jacob Bjork finished in 15th place. His time of 59.25 seconds was just .14 seconds away from the final qualifying mark. Ryan Schultz finished 23rd in the same event with a time of 1:00.10.

“[Bjork] dropped a full second from his personal best. It was a little disappointing (to finish 15th)...but he’s definitely excited for next year,” Eames said. “That was a great end of the season for him.”

Powers finished 13th in the 100 fly, a mere .06 seconds away from qualifying for the finals.

With Hein’s two individual races and the medley relay still alive for today’s finals, DeKalb-Sycamore is looking for its highest team finish ever at the state meet.

“The guys keep on talking about history,” Eames said. “We’re all pretty hopeful that it’s going to be another good day for us.”

Kevin Druley contributed to this report.