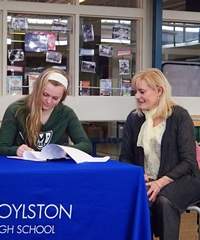 This article was in The Banner, a newspaper that serves West Boylston and Boyston

WEST BOYLSTON — It might seem unusual for a press conference to be called at West Boylston High School, but it was not your typical announcement, according to Principal Larry Murphy; West Boylston had an athlete ready to sign her commitment papers to a Division 1 school.

Last week, senior Audrey Corcoran signed her letter of intent to attend Manhattan College this fall, accepting an athletic scholarship for swimming, and a dean of engineering scholarship that she said she hopes to put to use to become a civil engineer, with a focus on environmental engineering.

Corcoran, who swims out of WPI under coach Don LeMieux and his organization, Greenwood Swimming, comes from a long line of swimmers, according to her father.

"Her mother (Lori) was a (collegiate) swimmer, so she has that pedigree," David Corcoran said, noting his other daughters — Veronica, Caroline and Yvonne — all swim. Veronica is now a member of the UMass swim team.

Swimming is an activity, David Corcoran said, that dates back two generations, when Audrey's maternal grandmother, Rose McCluskey, started her daughters in the pool at the YMCA when they were children.

Audrey began swimming at 6 years old. She has twice competed at the national level in recent years, finishing in the top eight in New England in 2013, and finishing 12th of 40 swimmers at a competition last summer.

The current generation of Corcoran swimmers swam for LeMieux in Fitchburg prior to his joining WPI as a coach three years ago. It has been, at times, a hectic lifestyle.

"We're really proud of her," David said. "It takes a lot to do what they (his daughters) do."

When in Fitchburg, the family was out the door at 4:30 in the morning to swim before returning to West Boylston, bags already packed, to catch the bus for school.

Now, Audrey described her typical day as waking at 4 a.m., followed by swimming, followed by school. After school, its either back in the pool or weight lifting until 5:30. Then it is time for homework.

But the hard work, she said, is worth it.

While she said she often misses out on the opportunity to spend time with school friends, one of her motivations is the friends she has made swimming.

"Some of my best friends are on my swim team," she said. "I've made some really good friends and going to practice is my chance to see them every day."

Physically, she said she enjoys the feeling she gets after practice. The endorphin rush is a feeling she and Lori Corcoran likened to what runners call "runner's high."

All of her daughters' successes, Lori said, is possible because of the support they have received from coaches and West Boylston High School.

"It's an honor to sign at the school, because she couldn't have done all of the competitions without the school behind her," Lori Corcoran said. "You're really a student first, but swimming opens doors. It's a big honor to swim in Division 1, but it is a bigger honor to have a scholarship."

Given the schedule of the swim team, the Corcorans have been allowed flexibility in their schedule. Teachers have allowed the girls to make up missed class work and, likewise, coaches have allowed some time to study for exams and do projects.

Teachers, Audrey said, have also taught her time management skills necessary to be a Division 1 student-athlete.

For Audrey, who is also taking a college course at Quinsigamond Community College through the high school, the result is a place on the high honor roll.

"The two things that have helped Audrey are her commitment to academics as well as athletics, and good time management skills. She's not just an athlete. She's the total student."

And the school character may have carried over. Audrey said her choices for colleges came down to Manhattan College and the University of Rhode Island (URI). It was an overnight trip to Manhattan that made her decision easy.

"I thought I was going to want to go to a larger school because I was coming from a small school," she said. "But I liked the small class vibe. I made my decision that night."

While the time commitments have sometimes been frustrating, Corcoran said, if she had a message for younger students, "it has all been worth it."

"Hard work really does pay off in the end," she said. "I know, sometimes during the year, you can get stressed out, but, especially at the end of your senior year, it does pay off."