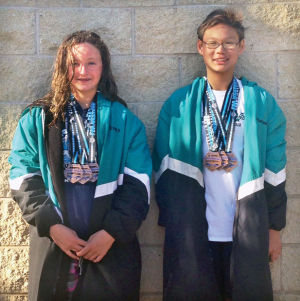 More than 1,500 swimmers competed in the four-day meet. If they finished in the top 10 during the morning preliminary session, they swam again in the afternoon finals.

In the 50 breaststroke, her morning time of a 32.07 seconds broke a NVST record of 32.45 — set by Elise Roberts in 2008 — and qualified her for the finals. During the afternoon session, Dusky broke her new record with a time of 32.00, to finish fourth overall.

Pascual competed in seven events and achieved six best times. In the 400 IM, his morning time of 4:46.93 broke his own NVST record of 4:48.55, set last month, and qualified him for the finals. In the afternoon, Pascual dropped his record time by another five seconds and placed fifth overall.