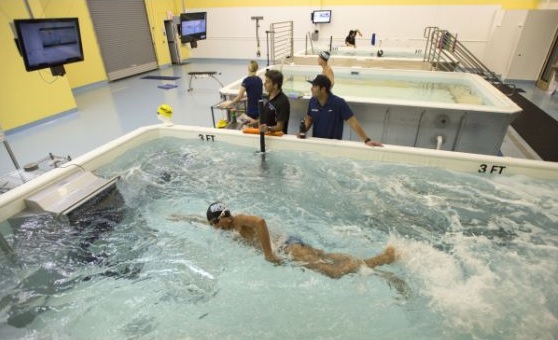 LAKE FOREST – She had been in the pool for only 20 minutes, but Novaquatics swimmer Gabby Graves, 13, already was bracing sore abs with her hands.

She stood waist-deep in the pool, watching a video of her swimming taken seconds prior, the recording showing every stroke.

Graves was among a group of swimmers who recently spent an evening in Lake Forest testing the waters at SwimLabs Swim School.

The company, founded in 2007 in Colorado, kicked off an expansion into Southern California in late 2013. The Lake Forest site is one of two in the state; the other is in San Diego's North County.

SwimLabs pops swimmers in an artificial current pool and films their techniques using three cameras that pump live feeds to a screen mounted near the tub. An instructor watches each swimmer's movement via the cameras.

Owner Brett Rose first saw SwimLabs' methodology in action when he signed up his daughter, then 5, for lessons at the company's first location in a Denver suburb.

“I went: ‘Oh my God, this is unbelievable,'” he said. “Being a swimmer at a high level all my life, I wish I had this when I was competing.”

SwimLabs founder Michael Mann felt the same way during a visit to the Olympic Training Center in Colorado Springs, Colo.

The technology in use was available only to the handful of swimmers competing at the Olympic level, Mann said. “There was nothing really for the elite competitive swimmer” who wasn't planning to compete on the world stage.

Laid off from his building-industry job with the collapse of the housing market, Mann set up shop in the basement of an animal hospital on a frontage road. Interest grew through word of mouth, and about three years later, Mann opened a second Denver-area school.

In the meantime, Rose's daughter had begun swimming competitively, and she went back to SwimLabs again, this time to improve her technique.

“She learned to swim quickly at SwimLabs and then blossomed competitively after swimming there,” Rose said.

Watching her improvements convinced Rose the business was filling an unexplored niche. He also was ready to switch careers.

“As I got tired of traveling as a sales rep, SwimLabs was calling my name,” he said.

As Reported by the OC Register