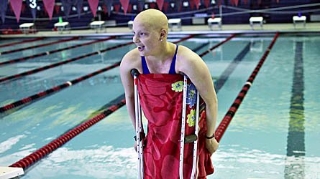 Listed below is an article about Grace Waller from the Daily Chronicle.

DeKALB – It's a slow afternoon at the Kishwaukee YMCA swimming pool.

In one corner, a group of elementary- and middle school-aged campers splash around while playing a game. In the far lane of that same pool, Grace Waller swims alone.

She deliberately pulls – first with her left arm, then her right – and loses herself in the swim until she reaches the wall, at which time her head pops out of the water.

After a minute, she yells "Can I go again?"

No response. Coach and tutor Leah Eames, stopwatch in hand, is temporarily distracted.

This time, she reaches the north end of the pool before playfully popping up, leaning toward Eames and saying, "I guess I'm in this on my own."

Nothing could be further from the truth.

For the past 10 years, that pool has been Grace's second home – just a mile from her first one.

Out of all the things the 16-year-old DeKalb High junior lost after she was diagnosed with cancer last Thanksgiving, swimming might have been the most painful.

The knee and six inches of her femur that was removed will heal.

The school work and classes she'll make up when she returns in late October.

The body hair will even grow back.

"You never know how much you need nose hairs until they're gone," Grace said.

But the six weeks she couldn't swim as she healed after the March 9 surgery to remove a cancerous tumor in her upper right leg and knee, were the most difficult to bear.

Grace's first question to her doctor at Chicago Rush Hospital following surgery was when she could swim again.

"I was warned about you," the doctor responded.

Grace swam between chemotherapy treatments until the day before her surgery, and since being allowed to re-enter the pool, she comes whenever she feels up to it.

Back and forth on her own, only a coach watching.

"I'm not a real patient person, so I have to keep reminding myself, you know, to just be patient," Waller said. "Right now it's a little frustrating, but I'm not worried.

The pain began in her right knee at the end of last summer's YMCA season.

For a breaststroker such as Waller, that wasn't anything out of the norm.

"We thought it was just something that she tweaked the wrong way," DeKalb County Swim Team coach Brian Bickner said. "Grace has never let on to anything being too painful or excruciating."

But, as the high school season began, things got worse.

By the end, Grace knew something was wrong.

"I didn't want to go to the doctor because I didn't want them to tell me I couldn't swim," Waller said. "So I just wanted to finish out the season because I thought it was an ACL or I tore a tendon or something, because I'm a breaststroker and we always put a lot of pressure on our knees."

She scheduled an appointment for after the state meet, but not before she swam a personal best 2:08.85 in the 200-yard individual medley to finish 11th at state.

"She was leading the race at the beginning, then she hit the breaststroke – which is tough on the knees – and it really fell off," said her father, Brad Waller, a former Northern Illinois Univeristy basketball player turned Sycamore attorney. "When you look back, it's amazing what she did it with a tumor in her knee."

A few days after the meet, an X-ray revealed the tumor. Five years earlier, older brother Kyle found out he had a non-cancerous tumor in the same spot of his leg.

The chemotherapy began soon after in hopes of reducing the size of the tumor before surgery.

Grace began losing her hair in December and, while he was home over the holiday break, Kyle and Grace shaved their heads together. That was the first of three times Kyle would do so.

On March 9, after removing the tumor, doctors put a device in her leg that would replace her knee and bottom six inches of her femur permanently. Only her original kneecap remains.

They had to remove 10 percent of Grace's quadriceps muscle, leaving her right leg looking significantly smaller than her left as she goes through the process of chemotherapy on crutches without the use of her right leg.

Someday, Waller believes, this will all be a thing of the past.

"She wants to beat cancer and get back in the pool," Bickner said. "I'm not doubting it, she'll do it.

"She's got strong will."

The idea was tossed around within the Waller family and then Bickner made the plunge, donating 2,000 baby blue "Amazing Grace" wristbands that the Waller's have sold – at $2 a pop – to raise money for childhood cancer research.

Most of Waller's teammates and friends have them, along with "Amazing Grace" T-shirts and swim caps that her DCST teammates wear at championship meets.

"After she found out, Grace came in and faced all the kids and the parents and coaches and told them," Bickner said. "She seemed to be handling it extremely well. A lot of us were a lot more upset, at least visually, than she was. She was strong and said it was going to be OK and that everything was going to be all right."

On April 8, before the final session of the YMCA Winter Nationals at the U.S. Swimming Hall of Fame in Fort Lauderdale, Fla., Grace's older sister, Emily, took the microphone and gave a devotion to the crowd about Grace.

Grace couldn't be in attendance because of chemotherapy treatments, but she would watch the videotape later on her camera phone.

"The cancer has not changed Grace," Emily told the crowd. "She still has goals. Grace learned how to set goals and how to attain them from years of swimming and preparing for this national meet.

"She learned perseverance from our coaches and her teammates at our YMCA. She learned how to never give up or let any challenge get the best of her. My family is humbled by the love, concern and character shown by our YMCA family."

Grace's support network immediately grew. Teams from all around called to order wristbands and inquire about T-shirts and swim caps.

"Other teams would order 100 to 200 bracelets and T-shirts," Bickner said. "It's not just our team, it's swimmers all over the state and the country."

On May 8, Waller's neighbor and DCST mother Jill Seneczko organized a fundraiser at O'Leary's Irish Pub & Grill to raise money for the St. Baldrick's Foundation. People showed up to shave their heads while others bid money on the shaved heads.

Fifty-one people came and they raised more than $28,000 – and that amount still is growing.

"People I don't even know are being supportive," Grace said. "It's crazy what people do; they're all so nice."

A port on the left side of Waller's chest is a constant reminder of the chemotherapy process. A foam board on the wall in Rush Hospital's Room 573 is a reminder of what she has left – seven chemotherapy treatments.

At the hospital, Grace does everything she can to take her mind off the poison that's being pumped into her body, an attempt to ensure the cancer the doctors removed won't ever come back or spread.

She uses her laptop, she's constantly text-messaging her friends, she's making bead bracelets for the nurses and her friends, and – recently – she's even picked up playing solitaire with real cards.

A common room on her floor also has become home to Wii tournaments, where Grace and her fellow patients with osteosarcoma, a bone cancer that affects 500 kids each year in the U.S., can pass time in the pediatric unit.

Grace will chat about anything. But, when it comes to her cancer, she does so only when necessary.

"Grace hates talking about cancer," said her mother, Jacque. "There are so many other things to talk about."

Jacque updates a blog for Grace's family and friends while Grace entertains visitors and they entertain her.

"The nurses on the floor make it really fun, they make it interesting," Grace said, adding that one nurse had dinner with her family in DeKalb a week before. "There's always people coming in the room, like magicians."

Hospital stays are usually 3-6 days long. The intensity of the chemotherapy session usually decides how Grace will be feeling.

During her weeks off, Grace goes to Kishwaukee Hospital to have her blood drawn every Monday. The results are immediately faxed to Rush, where they are analyzed before they make a call to Jacque.

Her platelets counts were low. She went back in the hospital with a high fever and received four bottles of blood in a blood transfusion.

"Basically, my immune system was so low that I didn't have an immune system," Grace said. "I can catch anything."

Grace glides seamlessly across the water with a pull buoy between her legs, a device meant for arm strength training exercises that prevent her from using her legs to swim.

After her workout, Grace climbs out of the pool and picks up her crutches as Eames hands her a towel to dry off.

Less than two hours later, Waller's DCST teammates fill that same pool again with shouting, laughter and the effervescent sounds of youth as they continue their final preparations for the coming week's YMCA Nationals.

Grace qualified for the meet along with 17 of her teammates, but this year she'll have to settle for cheering on Emily.

A year from now, however, Grace has plans of her own. She will work to earn a swimming scholarship to the University of Michigan, a longtime dream she hopes will be fulfilled.

"It matters a lot more to me now," Grace said. "Before, I would have those days when you take it easy and – not slack off – but not go all out.

"Now, everything matters. Every day counts."