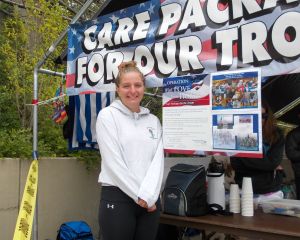 Megan Minor has a lot going on this summer.

As a senior age-group swimmer for the Napa Valley Swim Team, she is in the pool, training twice a day, from 5 to 8 a.m. and again from 4 to 6 p.m. at Napa Valley College. On top of that, there are dry-land workouts. Her only day off is on Sundays.

The big meet that Minor – who will be a junior in the fall at Napa High School – is pointing to is Pacific Swimming’s Adam Szmidt Memorial Long Course Junior Olympics, July 11-13 at the Concord Community Pool in the East Bay.

There are the Redwood Empire Swim League Championships, scheduled for July 18-20.

There is also some other business that Minor is working on.

She is partnering with Queen of the Valley Medical Center and later this month will join other NVST members at Crosswalk Church to put together care packages that will be sent to military troops overseas.

This year, NVST re-named its annual long course meet, dropping Father’s Day Frenzy and going with Operation: With Love From Home. The club dedicated its meet, held last weekend at Napa Valley College, to military troops stationed around the world.

“It’s a really good way to help people out, to show that we care about them and we’re supporting them,” said Minor. “We’re thankful that they’re fighting for us, so that we can follow our dreams.”

It was Minor, 16, who came up with idea for the name change in December, getting approval from the NVST’s board of directors. She organized a donation drive, asking each of the 36 teams and 589 swimmers, ages 7 to 18, at last week’s meet for bottles of sunscreen, which will be added to the care packages.

“I wanted a way to give back to the community,” said Minor, who has been working closely with Liz Alessio at Queen of the Valley Medical Center. “We know how important sunscreen is with swimmers, because we’re out in the sun all the time.

“We want to show that we care about them and we’re supporting them.

Operation: With Love From Home works to support deployed armed forces. It is supported by the Community Outreach Department at Queen of the Valley Medical Center and relies on a group of volunteers. Each package also contains a hand-written letter of support and thanks.

“I just think it’s a really good cause,” said Minor.

Members of Minor’s family have been in the military.

Megan Minor found out that U.S. troops need sunscreen, so she took it upon herself to organize a sunscreen drive. A drop-off box was located next to the clerk of the course tent on the pool deck at NVC during the meet last weekend.

“I’m extremely proud of (Minor),” said Asher Green, the NVST’s head coach. “We always talk about our program being more than just about swimming, or swimming fast. And this is just a great example of a person who’s trying to do great things in and out of the pool.”

Minor also has the 50 free record, along with the 200 medley relay and 400 free relay records at Napa High.

“She’s been a great swimmer for us for her entire career,” said Green. “She’s a great worker, at practice, at school. She tries to excel at everything.

“She just has a tremendous work ethic, a tremendously driven young woman. She loves the sport. She’s one of those people who always gives 100 percent, no matter what.

“You always get everything she has – every practice and every race, which is pretty awesome. When it’s time for her to go fast, she’s always ready to go fast.”

There were 68 swimmers with the NVST who were entered in last week’s meet. The team hosts two other meets during the year, one in the fall and the other in the winter.

The NVST offers year-round competitive swimming for all ages and abilities.