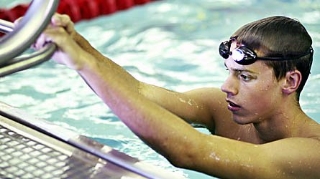 Grant Alef knows that it will all come down to fractions of a second this week.

That’s why the Kaneland junior has spent his summer trying to trim time however he can.

He’s done plenty of core-training exercises and work on his abdominal muscles at the Kishwaukee YMCA in DeKalb. He’s refined his flipturns and spent hour upon hour in the pool working on his endurance with DeKalb County Swim Team distance teammate David Gordon.

This week, Alef will get a chance to have his work pay off at the YMCA Nationals in College Park, Md.

The Maple Park resident enters the meet seeded in the top six in four individual events along with competing on all of DCST’s relays. That will add up to two events per day in the five-day event that starts today at the Eppley Recreation Center on the campus of the University of Maryland.

“[Gordon] and I have done some pretty crazy workouts this year,” Alef said.

This week, he’ll find out if those workouts were enough for him to maintain his best over five days.

Alef will race in his premier event, the 1,500, tonight before settling in to the rest of the meet. He’s the second seed in the timed event while Gordon is fifth.

“I’d like to be top 3 in that one event,” Alef said. “If that doesn’t happen, I want to get best times and I just want to have fun.”

After Nationals, Alef won’t get much time off. He’s one of 24 swimmers nationally to be selected YMCA Altitude Training Camp from Aug. 17-22 at the U.S. Olympic Training Center in Colorado Springs, Colo. He’ll be the second DCST member to attend the camp after Matt Chambers went six years ago.

Once there, coaches will break down his swimming techniques and perform a series of tests to show Alef any improvements he can make to optimize his abilities.

Alef said he swam in Colorado one time last summer and knows how much of a difference the altitude can make.

“I would come out of a turn and it was like I was breathing through a straw,” Alef said. “I was really tired. But it was easier to go farther as I adjusted.”

Alef started swimming with DCST in 1998 at the age of five, but 11 years later he’s on the cusp of breaking through on a national level this week.

“But If I don’t do as well as I would like, I’ll still be a junior in high school,” Alef said. “I’ve still got two more years.”