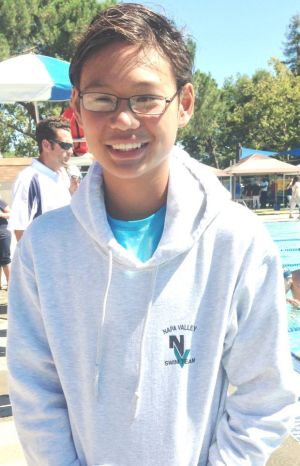 Of all the boys in the 11-12 age division on the 136 teams in Pacific Swimming, Pascual was one of 11 chosen to compete based on his achievement of very stringent time standards.

Pascual has been a NVST member for six years, spending numerous hours training at the Napa Valley College pool under coach Kathy Stacy. His favorite event is the 400-yard individual medley, in which he holds both the short course and long course NVST team records. He also holds the NVST team record in the 10-and-under boys 100 IM.

He is also a Black Belt in tae kwon do, has played the guitar for over six years, and carries a 4.0 grade-point average at Napa’s St. John the Baptist Catholic School, where he is entering the seventh grade.