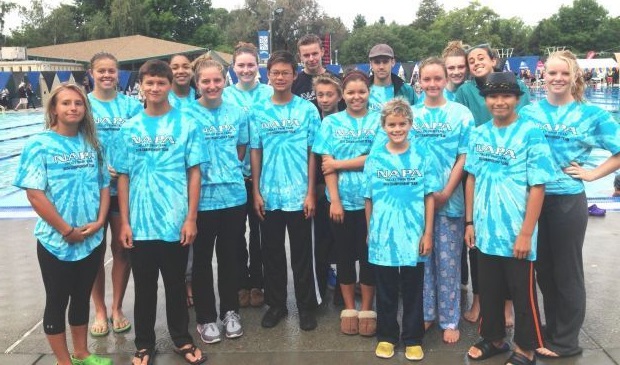 The meet had a preliminary and finals format, meaning swimmers competed in the morning and if they finished in the top 8, they swam again in the afternoon finals.

Matthew Larsen competed in the boys 9-10 division, where he swam the 50 breaststroke and achieved a new Far Western time and a sixth-place overall finish.

Emily Dusky competed in the girls 13-14 division, where she was third in the 100 breaststroke, fourth in the 200 breastststroke, and eighth in the 800 free.

Gabe Wright competed in the boys 13-14 division and swam to a new Far Western time in the 200 fly, dropping over five seconds, and also achieved a best time in the 100 fly.

Megan Minor competed in the girls 15-16 division, where she achieved a best time in the 200 free, a fifth in the 200 back, and a sixth in the 100 back. Kathleen Schafle achieved 100 percent best times, which included new Junior Olympic times in the 400 free and 100 breaststroke. Also competing in this age group were Alyssa Lindsey and Grace Murphy.

Louis Ayers competed in the boys 15-16 division, swimming to an eighth-place finish in the 200 fly.

The Napa Valley Swim Team is a year-round program offering competitive swimming with high quality professional coaching and instruction for all ages and abilities. In addition, NVST offers a non-competitive training program, summer swim classes and pre-competitive swimming instruction. For more information on NVST, please call 257-SWIM or via e-mail at napavalleyswim@yahoo.com