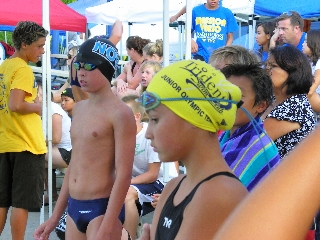 Lexi Hopps  traveled to to swim the 1000 Free.  Swim she did dropping about 28 seconds.  Her first 500 yard split was faster than her previous best 500 swim.

Gabriel McIntire did an outstanding job in his first appearance as a Trident.

Theresa Lo won the 200 Backstroke in a time that qualifies her for summer JOs in that event when she turns 13.  She also won gold in the 100 backstroke in a which is sensational!!!!

David Wang, Justin Wang and Jeremy Wang were on fire in their respective events as they all raced to best times through out the day.

David picked up numerous awards for his efforts……

On Sunday the Tseng Brothers, Andrew and Edward had 100% best times in all their events swum.


Mei Ling Chun won the 50 Free for 11-12 girls, then teamed up with Vanessa Cheng, Theresa Lo and Lauryn Robbins to win silver in the 400 yard Free Relay.  Mei Ling also won Silver in the 200 fly dropping 8 seconds but it was the 100 back where she showed tremendous improvement dropping 8 second to win the bronze.

Rachael Ramos saved the best for last,  swimming the 100 backstroke increasing her speed on the last 25 to drop 3 seconds from her previous best time.

Brittany Yee swam one of her best races of the year so far in the 200 Freestyle dropping 8 seconds and just missing the December Invite cut.

In our very young existence as a team we were finally able to field a 13-14 Girls relay with Brittany Yee, Tiffany Chow, Connie Tsai and Rachael Ramos

Our younger girls Ellen McGill, Kat Cheng and Sophia Ramos looked great in their events dropping time to add to the team total.  Ellen, Kat and Sophia turned in several outstanding swims during the meet.

This was an OUTSTANDING  meet for the Trident Swim Club.

AWARDS   - will be placed in your family folders on Monday Night.