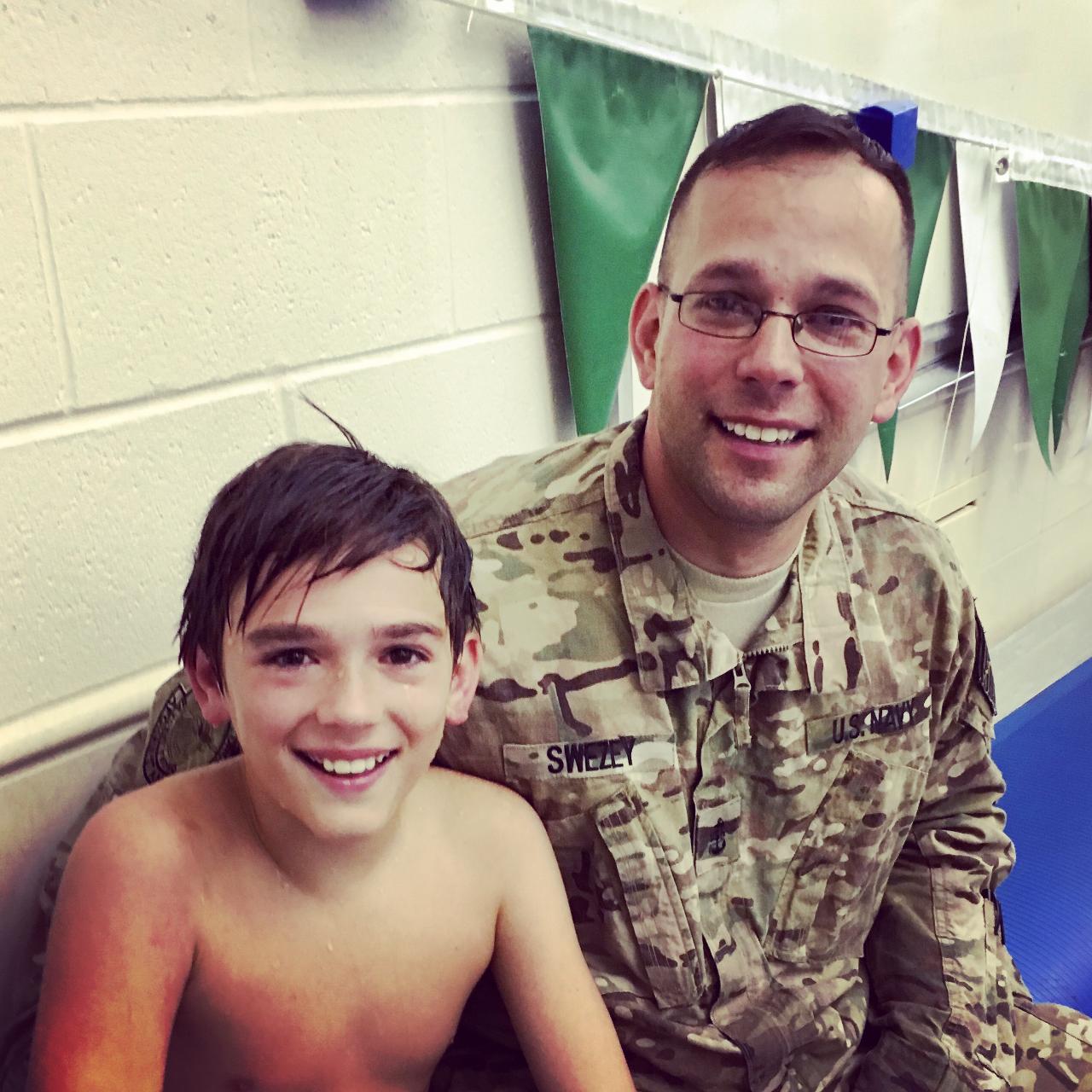 More than 260 Mason Manta Ray swimmers kicked off the 2015-2016 swimming season with the 13th Annual Manta Rays Intrasquad Swim Meet.  The meet ran smoothly thanks to our great parent volunteers and the swimmers lit up the water with 747 best times and 19 new meet records!

We were treated to an extra special homing at this year’s meet.  In front of a packed natatorium at the Mason Community Center, we welcomed home US Navy Chief Paul Swezey!  After seven months in Afghanistan, Swezey came home two weeks early to surprise his family, and to be a surprise lane timer for his 10 year-old son Jayson!   Needless to say, there was not a dry eye in the pool.

The Mason Manta Rays, a City of Mason USA Swimming team, will host the three-day Mason Fall Invitational November 13-15, 2015 and the Southwest Regional Championships February 18-21, 2016.  These meets will bring thousands of swimmers, parents and officials to the City of Mason’s Mason Community Center.  In addition to entry fees helping to raise funds for the City, the High School Swim Boosters operate a concession stand.  Many of the local businesses also reap the rewards of hosting these big meets because these swimmers have such huge appetites.

With more than 300 total swimmers on the team ranging in age from 6 years-old to 18, plus a growing adult Masters, the Mason Manta Rays have become one of the biggest and strongest teams in Southwest Ohio.  “We have swimmers in the pool at the Mason Community Center from 5:20 in the morning till 9:30 at night,” said Heis.

This type of commitment by the Mason swimmers and coaches is required to build a program that has grown from 110 swimmers to over 300 over the past decade.  The team has placed very high in the state and is nationally ranked 54th out of over 3000 teams in the nation.  The team has set its goals higher in 2015-2016.  “While it’s exciting to think about what our 10, 11 and 12 year-olds will do when they are 16, 17 and 18, but we are very excited to see how many swimmers we can qualify for the 2016 U.S. Olympic Swimming Trials for the Olympic Games in Rio,” said Heis.

Running a top USA swim program also requires a big commitment from parents.  In addition to paying the annual fees to the City of Mason, parents volunteer an average of approximately 30 hours per year with some parents putting in a lot more.  “Our parents time, run the timing board, officiate, sell t-shirts, organize events, manage the web site, yell and scream for their kids, clean up the bathrooms, take pictures, direct traffic and never say no,” said Geoff Thatcher, a parent with three swimmers on the Mason Manta Rays.

The team currently has three swimmers qualified to tryout for the USA Olympic team at the 2016 Olympic Trials in Omaha.