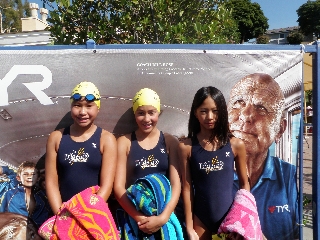 
The top race of the meet was in the 1650 freestyle.  Lexi raced a competitor in the next lane racing for 19 minutes in a close race.  Lexi then gutted it out by putting her head down and charging to the wall  to touch out her competitor.


Also competing were Aaron Tran and Alec Hsing.  Jill McGill and Brittany Yee were out of commission with illness.