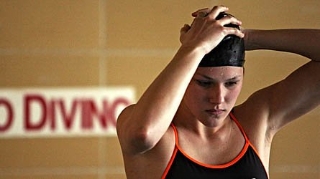 DeKALB – When Casey Jepsen touched the wall and looked up at the scoreboard at the St. Charles East Regional last Saturday, she was in shock.

A six-second time drop is almost unheard of. But, when the official times came out, Jepsen found out it was right. And the DeKalb/Sycamore co-op’s lone representative at this weekend’s state swimming meet at New Trier enters as the sixth seed in an event she was just hoping to qualify for state in.

“I still kind of can’t believe I went that fast in my 200,” Jepsen said. “I just felt really good that day. While I was swimming, I didn’t believe I was going that fast either.”

Jepsen’s premier event has always been the 100 freestyle.

She finished third in the 100 at sectionals and enters today’s prelims with the ninth best time (52.64 seconds) in the state.

That’s a huge jump for a swimmer who didn’t even know she could be part of the Barbs’ co-op team until her sophomore year, when she first started to get serious about swimming with the Kishwaukee YMCA/DeKalb County Swim Team.

Last winter, Jepsen qualified for state as part of two relay teams with Emily and Grace Waller and Kate Taylor. But she always swam in the other swimmer’s shadows.

With Taylor and Emily Waller graduated and swimming in college and Grace Waller missing most of the season as she went through chemotherapy treatments for a cancerous tumor that was removed from her right leg, Jepsen became the team’s premier swimmer.

“Those are people she has looked up to over the past three years,” coach Leah Eames said. “In practice she tried to keep up with them and that really benefitted her.”

While the individual events were her best times of Saturday’s sectional, her best performance may have come in the final leg of the 200 freestyle relay, where she came from behind to out-touch a pair of swimmers and ensure the Barbs’ fourth-place finish.

“In the past three years, she reached a different level each season,” Eames said. “She loves working hard and enjoys what she’s doing, that’s why she’s gotten better so quickly.”

Jepsen’s main concern coming into today’s prelims is her nerves heading into the individual events. The Truman State signee was given a bit of a reprieve this week on that, however, when the IHSA granted teammate Grace Waller a deck pass for the finals.

That means Waller will be there supporting Jepsen, just like at last season’s state finals in Evanston.

“I need to control the nerves,” Jepsen said. “I try not to think about it too much. If you do, you just psyche yourself out.”

If she doesn’t, she could be in for a few more surprises this weekend.