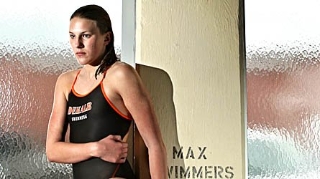 A cut above the rest

Casey Jepsen isn't used to having time off.

So this week is a little weird, as she rests following her run to last weekend's state swimming meet. By this time next week, she'll be back in the middle of training for YMCA Winter Nationals.

But, for now, she has a little time to reflect. And, despite not making the finals in the 100- or 200-meter freestyle races at the state meet, she still is abundantly satisfied with her times there, which rank second only to her sectional times.

For that effort, Jepsen is the Daily Chronicle's 2009 Girls Swimmer of the Year.

"I started thinking about it more and now, looking back, I'm happy with what I did this season and at state," said the Sycamore senior, who swims for the DeKalb/Sycamore co-op team. "I never in a million years thought I would go that fast."

Jepsen's work ethic and natural ability combined to help her reach a level she never thought possible. Her coach, Leah Eames, says that had a lot to do with her training but also was a reflection of the fact Jepsen has been racing at a high competitive level for just three seasons.

"Most swimmers start at 8 and experience those sever time drops from 10-12," Eames said. "She’s experiencing that all right now."

During this season, Jepsen dropped a second off her 100 time and 6 seconds in her 200 after working so hard on her endurance. Now, she looks at her times and knows they are good enough to finish in the top 16 at Winter Nationals the first week of April in Fort Lauderdale, Fla.

"I'm really hoping to do that this year," the Truman State signee said. "And I can see how much more time I can drop."

With her 6-foot wing span and ability to improve through training, Jepsen's ceiling could be higher than most other swimmers.

"Her potential hasn't been reached," Eames said. "She’s got a swimmer's body in every way and she’s one of the hardest workers I’ve ever had as a coach. Most people try, and they say they are giving 100 percent when it is really only like 90 or 80 percent.

"She’s one of the few people I’ve coached that can actually give 100 percent. It's her motivation and determination that sets her apart."