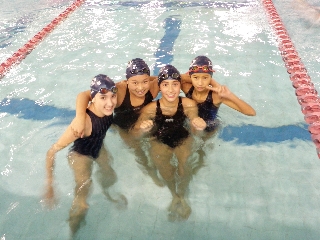 The Trident Girls finish in 8th Place while the Team finished 12th overall in the Combined Team Standings.  Meiling Chun, Theresa Lo, Jill McGill, and Lauren Robbins all swam super in the meet.   The Southern California Junior Olympics is the highest level of competition for the age group swimmers in Southern California.  Swimming for the boys were Alec Hsing and Michael Wang.

Highlights:  Meiling Chun finished 2nd behind the National Record Holder of the 100 IM, Ella Eastin.   Meiling qualified for finals in 5 events and won the consolation finals in her sixth event the 100 Fly.   Meiling also won bronze in the 200 IM and 100 Breaststroke.  Thersa Lo Qualified for Finals in her favorite event the 500 Free.  She was not done qualifying for the 200 IM (finals) and consolation finals in the 200 Free and 100 Free.   Meiling and Theresa combined with Jill McGill and Lauryn Robbins to garner three 8th place finishes and a 12th place finish in the relays.

One of the most exciting races of the weekend was when the quartet of Chun, McGill, Robbins and Lo, swam the 400 Freestyle Relay.   Chun Lead off with a blazing 56.70.  McGill and Robbins did a great job keeping the swimmers in the race with Rosebowl Aquatics.  When Theresa Lo dove into the pool she was a full body length behind.  Theresa swam a 56.9 second split to pass the Rosebowl Anchor.   Theresa's  teammates were excited in beating a disappointed and very fast Rose Bowl squad.