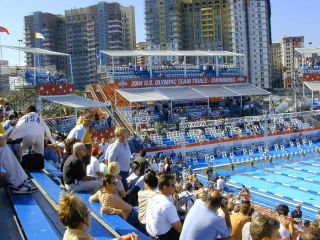 Mei Ling Chun and Theresa Lo, will be joined by Coach Stephanie at the SCS Swim Festival in Long Beach on Sunday, February 28th.   The top swimmers from Southern California were selected to compete and drafted on four teams at the All-Star Swim Festival.  This is the 4th year in a row Trident has qualified swimmers for this event.  Mei Ling will lead the Yellow Team, while Theresa and Coach Stephanie will represent the Red Team.