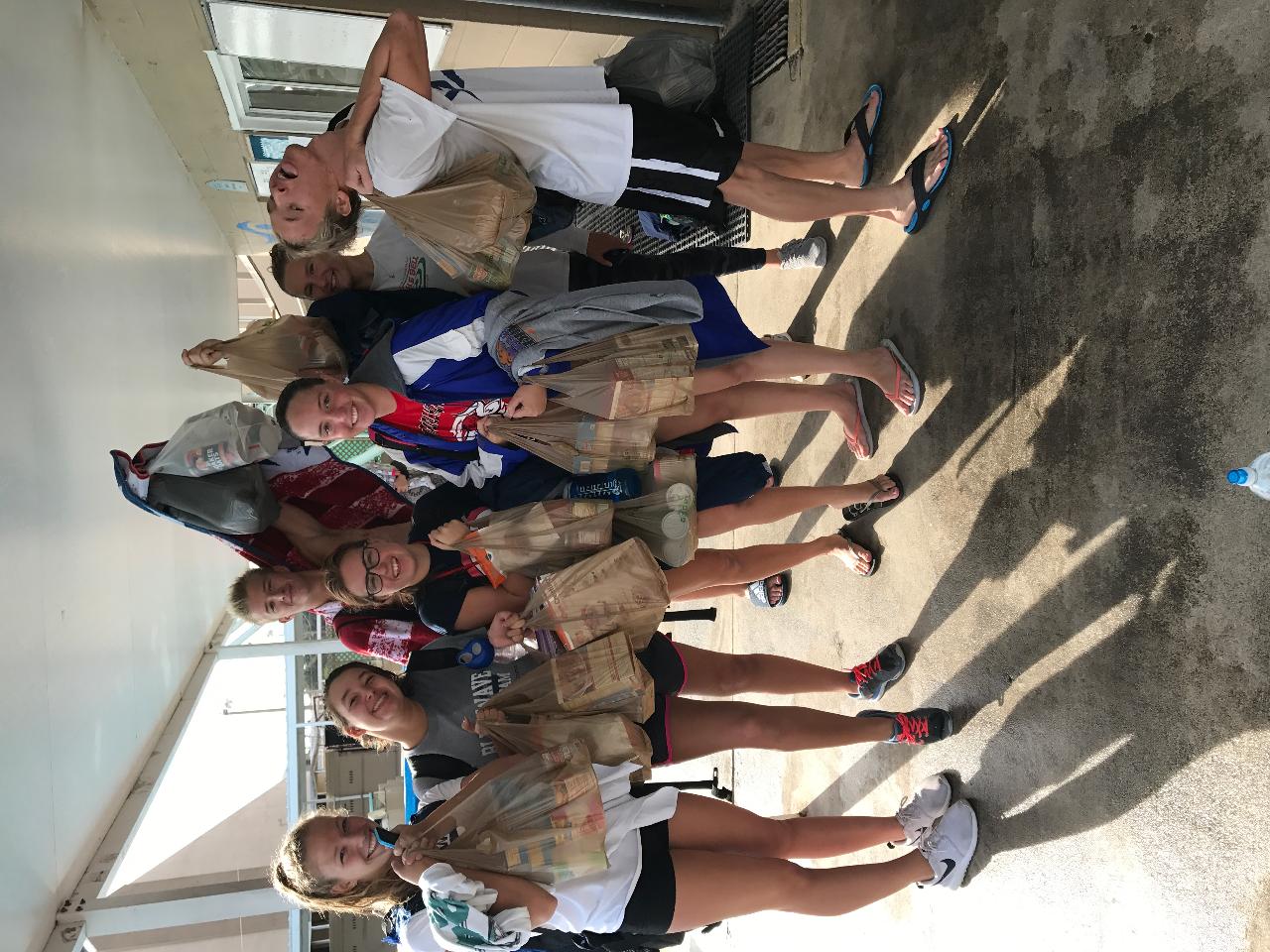 I hope everyone had a great Thanksgiving. I know our family had a lot to be thankful for this year. Please accept our best wishes for your family during this holiday season.

You will hear me use the phrase, “championship behavior” often when I am speaking with the swimmers. I feel that true champions are winners in and out of the pool. While there may be an occasional exception, most of the high performance athletes I have known over the years were not just great swimmers, but great people as well.

Growing up, I had the good fortune of being a part of a nationally recognized swim program. When our coach retired, he had one of the best dual meet records in the history of the sport. He won close to four hundred high school dual meets and lost only eleven in his twenty plus year career. To put that into even more perspective, six of those losses came in his first season. Most of that success was due to the age group program he put in place to develop the swimmers from a young age; a concept well ahead of its time.

My coach was a powerful figure, on deck and within the community. He demanded excellence from himself and his swimmers each and every day. It was considered an honor to walk through the streets of our town with chlorinated hair and one of our swim team shirts proudly on display for all to see. Where I grew up, being on the varsity swim team was akin to being on the varsity football team in most parts of the South. We were Mythical High School Champs from the early 1960s through the mid 1980s.

At first, I thought our coach achieved his successes because of how hard we trained...and believe me, we trained hard! As I got older, I better understood the real keys to his success. He knew how to create an environment where excellence was the standard in all facets of one’s life. He led by example and encouraged his team leaders to do the same. If you were on our team, you just acted in a certain manner...or you were not part of our team.

Even as a ten and under, I noticed that my older teammate idols consistently displayed certain behaviors and held specific positive attitudes. They were, to put it plainly, really nice people. They were courteous to the swim parents, they worked hard, yet were always full of joy. They went out of their way to open doors for the competition, they thanked officials after the meets, and they would even pick up the equipment and empty the trash can after every practice. I know that is a low bar to be impressed, but there was much more to these champions than common courtesy. They were also selfless in many ways.

I was always impressed with my older teammates willingness to help me learn a new way to do a backstroke turn or get me off the blocks better. Sure, our coach set aside some time for those sessions throughout each season, but that help was also offered to me on their own time as well. It really meant a lot to me that someone whose name was on our record board would take the time to work with little ol’ me. Words of encouragement were also spoken freely. In general, there was a true sense of family and purpose, regardless of age or achievement level on our team. It wasn’t until later that I found out that our environment was truly rare and special.

I was fortunate to start my coaching career under my former coach. I got to see under the hood, so to speak. I learned even more in terms of the Xs and Os, but I saw so much more than training concepts. I saw the way in which he connected with the swimmers and their families and worked to help them make choices that would unleash the champion within the athletes.

His presence was still powerful on deck, but I also saw his kind side. I saw how he could gently steer a swimmer into doing the right thing in a tough situation. I saw how he got the best out of swimmers by having them realize that all things are possible when you live and act in a certain way. I also saw his willingness to outwork his competitors. In essence, I got to see how to do it right.

If you swam for my coach you were taught from day one to focus on the process of preparation. If you did that, day in and day out, you would have success. He did not focus on specific times throughout the season, instead his athletes were focused on getting in shape and acquiring great technical skills. Sure, we had goals, but we did not obsess with times mid season because we knew if we stayed true to ourselves and our training, it would happen.

Unfortunately, many of the programs I observed as a young coach were outcome focused. The coaching staffs were constantly talking about times, rankings and wins. That attitude would permeate throughout their clubs. Swimmers and parents always seem to echo the sentiments of their head coach. It’s normal. They were following the head coach’s lead and every swim seemed like Olympic Trials.

For the swim families who were raised, so to speak, in that type of swim environment, times, placing at meets and individual rankings mattered. These families would constantly be seen checking the times, places and ranking of their competitors at meets. The parent’s self worth was tied to how their eleven year old performed in any given event of a mid-season meet.  I cannot even imagine how intolerable it would have been if they had Meet Mobile back then!

Since such an importance was placed on winning, that was their sole focus. They would even check how their child did in relation to one of their own teammates. It created hostility and many of the programs would never send a single swimmer to nationals, or in some cases, dissolve completely due to internal fighting and petty squabbles. Many great swimmers and families were lost to the sport.

Sure, some of the aforementioned coaches and programs had some short term successes, but none of those purely outcome-based clubs had any real, long term, national level success.  As my time in the sport as a coach grew, I saw how hundreds, perhaps thousands of clubs operated. The one constant I saw in truly successful clubs and coaches was an ability to instill championship behaviors and attitudes within their clubs as a whole.

I feel we are starting to do just that now, right here at Blue Wave. Case in point, our recent swim camp.

Last week, we held our First Annual Thankful Tree Swim Camp. While it is beyond the scope of this post to go into the details of the event, it was well attended and well received by our swimmers, some as young as seven years of age. We spent over 20 hours on technique, training and more. It was reported back to me that even the most nocturnal of our swimmers went to bed early each day last week.

Instead of charging a fee for the camp, we asked each participant to bring in some non-perishable food items to donate to a local emergency food pantry. We have a lot to be thankful for this year, so we thought we should give back to the community that supports us. We opened up the camp to a diverse group of swimmers, from age group one to nationals. Seven hours days are long, but we worked hard and had fun. Perhaps you saw some of the videos and pics on our Facebook page. If not, check them out.

While it was great to work with the swimmers on some much needed technical aspects, it was also important to me to continue to get them to have shared events and see themselves as one true team. Teams with cliques and separate visions do not tend to perform well over time. Our team is coming together.  It’s fun to watch them gel.

Specifically, It was great to watch the older swimmers interacting positively with their younger teammates. It was also nice to see some of our newer, older swimmers take the leap and try their hand at longer practices while cultivating new friendships. Most importantly, I got to see the look on the older swimmers' faces when they came back and told me about dropping off the donated food. Together, we raised 404.17 pounds of food for those less fortunate in our community.

Winning is great. It’s fun and exciting. I have been fortunate to have experienced winning from many different vantage points in the sport. I am positive that if we continue down this path, we will all experience winning many times over...in and out of the competitive arena.

Great job everyone. See you at the pool - Rich

Sent from my iPad

Just wanted to take the time to THANK each of you for all that you do for BSAC, our families and the entire Greater Brandon community each day. I am so thankful and blessed to work alongside so many talented and committed people that give so much of themselves to impact those that come through our doors and throughout Brandon. The great work you are doing continues to open up more and more doors of opportunity for children of all ages and ability and continues to lift them up to do things they never thought possible.

I hope that you all enjoy a safe, relaxing and festive Thanksgiving weekend with your family and friends. Again, thank you all for investing in the vision and mission of our organization and making BSAC such a strong family environment for us all!