All You Want To Know About Goggles (a.k.a. your glasses) (Hahahahahaha!)

By the 1960s some brave swimmers were making their own crude training goggles. But it wasn’t until 1968 that the first commercial swim goggles were available, shown below in this Swimming World ad. 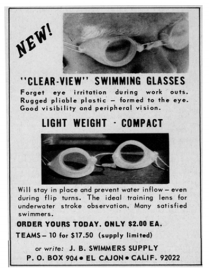 These goggles had no sealing gasket, and were just a hard plastic that painfully pressed into the eye socket and often leaked. They were not a big hit. But the trend had started and many manufacturers jumped in. In no time at all there were numerous types and models, and generally a non-leaking type could be found to fit most faces.
Interestingly, these first goggles were initially considered training aids, and therefore were not allowed in competition.

FINA quickly changed that rule and by 1970 they were allowed in competitions. David Wilkie became that first person to wear them in international competition, and the swim world has never been the same since. By the 1972 Olympics goggles had become standard equipment for virtually every serious swimmer.

By now you should know you can’t just buy the first pair of goggles that you see.

There are two simple tests what will help you.

Gently push the goggles into your eye sockets without using the straps. They should seal well, providing a gentle suction, and fit comfortably. They actually should "suction" on your face for a few seconds.
With the straps on, the nose piece should sit nicely on the bridge of the nose without digging into the skin.

If either of these tests fail, look for another type of goggle. No matter how cool they look on you!

When not diving (start off blocks), the straps should be fairly loose to avoid prolonged pressure on the eyes. If you need to tighten them to keep water out, then you either need new goggles, or you need a different type of goggle.

For diving (starts) and competitions you can tighten the straps a bit so that the eye cups won’t flip open. Races are short enough that the slight amount of extra pressure shouldn’t be a problem

Some new goggles usually come with an anti-fog layer to keep the goggles clear. But this layer doesn’t last forever, and eventually they’ll start fogging up.

So here’s what you can do:

* don’t wipe the inside of your goggles with your fingers or anything else to wipe away the fog. This will just scrape away the anti-fog coating even faster & oil from your skin will eventually make 'em fog even worse!
* some people like having a small amount of water in them to clear away any ‘fog’ while they swim, others lick the inside so the saliva will keep fog from forming (preferred cheapest method!)
* rinse them off after use to remove chlorine or salt residue
* some use an anti-fog spray made for goggles (or a drop of baby shampoo)

And one last tip. Bring an extra pair of goggles to practices and competitions. Make sure they are already adjusted for you, so that if you need them in a hurry they’re immediately good to go. I’ve seen swimmers bring an extra pair behind the blocks.