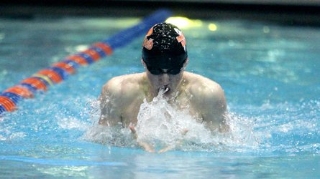 EVANSTON – Grant Alef shook his head with an easy smile as an overflow crowd glanced at the video board.

Twelve names, times and school abbreviations flashed up, and fans packed into the Evanston natatorium shouted at what the Kaneland junior somehow already knew. He had advanced to the consolation finals of the 100-meter backstroke at the IHSA Swimming & Diving State Meet, qualifying ninth in 52.65.

The feat joined Alef's earlier ninth-place turn in the 500 freestyle, making him the most prominent Knight of the pool since state champion diver Jim Watson in 1980.

Alef figures to have plenty of backers when the finals begin at 1 p.m. today. For starters, there are his "coach," Shelley Hueber, and "assistant coach," Tom Alef, Grant's dad.

Both use air quotes because they know they've done little more than root Grant on through the years. The IHSA requires individuals who come from programs without full teams – and full-time coaches – be accompanied by representatives of their own schools.

On Friday, his 500 free time of 4:39.81 actually was slower than the year before, but Alef didn't particularly mind.

"I've already gotten down so low that it's just the little things that can help me now," he said.

He said those include rolling his hips more as he makes turns and getting over a reluctance to come too close to walls, which stemmed from recent knee surgeries.

The DeKalb/Sycamore co-op team, with whom Alef trains, failed to produce any qualifiers for today's finals but two Barbs did boast personal bests. Senior Chad Thompson took 24th in the 200 individual medley in 1:58.32.

In the 100 breaststroke, junior Michael Gordon's time of 1:00.02 was 17th in the field despite setting a new school record.

"Coming to the state meet, we wanted to get in there and score," Barbs coach Leah Eames said. "It's disappointing not to move on to Day 2, but I don't think anyone will argue the state of Illinois is extremely competitive."