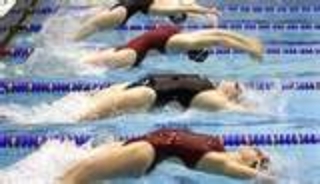 The Kishwaukee YMCA / DeKalb County Swim Team (DCST) finished their 2009 – 2010 regular season with a 12 – 1 dual meet record by defeating Rockford and Belvidere.  As a team, DCST had 128 personal lifetime best times out of a total of 266 swims for a 48% improvement rate.  DCST also had 15 individual swims which were first time District qualifying times, and 10 individual swims which were first time Area qualifying times.

After each meet, the coaching staff picks two swimmers, one girl and one boy, as the “Big Dogs" of the meet. Big Dogs are not only selected on their performance in the meet, but the coaches also take into consideration the swimmer’s practice attendance, work ethic, team spirit and sportsmanship. For this meet, Lauryn Stoffregen, age 9, and Dillon Anderson, age 8, were selected as Big Dogs of the meet.

Tomorrow at the DCST Open will be the last chance for swimmers to achieve District Qualifying times.