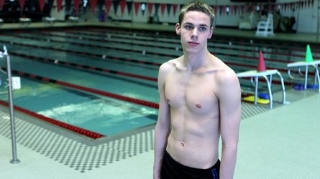 Driving to be the best

Grant Alef does one better. He switches carpool routes.

There are many ways to get from Kaneland High School to the Kishwaukee Family YMCA in Sycamore, a concept that darns geometry but not Alef’s sanity.

“I’m always staring at a black line at the bottom of the pool during swimming,” Alef said, “so that never changes. This is for a little variety.”

If Alef were selfish – or even content – he’d flaunt his ranking in a program without a full team more than he does.

As it is, he wants company. Just ask Shane Fergus.

Fergus was grabbing his books for the last class of the day one afternoon in January 2009 when Alef appeared at his locker. Alef knew little of the freshman – only that he had swum before, and not for Kaneland.

Along with Kendall Renaud, who did not compete this season, Alef coveted a Knights relay for the upcoming sectional meet. An easygoing Fergus made three, heightening the quest for a fourth swimmer.

Ultimately, the search failed, something Alef has grown used to while working to maintain optimism.

He spots various “98-year-old-guys” at masters meets and realizes teammates can only do so much in swimming.

Still, he’d like to have them. If only he could change his community’s culture.

“Swimming is not as convenient as pee-wee football or wrestling, or something you just pick up when you’re four or five years old,” says Shelley Hueber, swimming parent and principal at John Shields Elementary in Sugar Grove. “You can start swimming when you’re young, but that’s a lot of car time and commitment for mom and dad.”

For years, Hueber drove a sparse carpool of her own to “Kish,” meeting Alef through his older sister, Sarah, a teammate of Hueber’s daughter.

Today, Hueber calls Alef “extremely hard-working and humble,” which explains why she has stood on deck with him at the past three state meets. IHSA regulations require individuals who come from programs without full teams – and full-time coaches – to be accompanied by representatives of their own school districts.

Hueber uses air quotes in discussing her role as coach and deflected any possible credit when Alef took eighth in the 100-yard backstroke (52.73 seconds) and ninth in the 500 freestyle (4:40.78) at Evanston on Saturday.

Gathering his things on deck, Alef texted his cross country coach, Chad Clarey, who spread the word to other Kaneland coaches and administrators. Alef noticed they got the message on his way to his locker Monday morning.

“Not overwhelming congratulations, but it’s good to know people are proud of me,” he said.

Alef credits immense family support for his success. His parents – father and “assistant coach” Tom and mother Sally – learned about swimming as their children mastered their strokes.

Sally operates the scoreboard at home meets for the Kishwaukee YMCA/DeKalb County Swim Team, while Tom could diagnose a touch-pad malfunction in a splash, er, flash.

“He jokes around a little bit and he’s a fun guy to be around, but he’s still always focused and ready to go,” Fergus said.

Until recently, it looked like a second Fergus would join Alef’s carpool next season. But Jack, an eighth-grader, decided to attend Marmion, continuing his allegiance with coach Bill Schalz’s Academy Bullets club team.

Naturally, Alef did his homework and understands Kaneland freshman-to-be Phillip Cutsinger to be on board for the 2010-11 team.

Given almost a full year to find a fourth member for that elusive relay, Alef feels good about the upcoming search. In the event it falls short, however, he’ll keep driving to improve just the same.