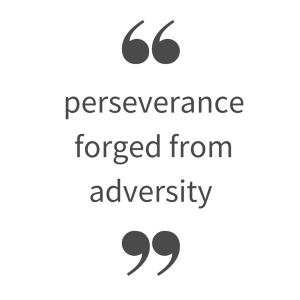 I was following a school bus the other day when it stopped to pick up two middle school aged boys.  Because of the framed glass emergency door in the back of the bus I could watch the two boys playfully tussling with each other as they made their way to the very last seat of the bus.  Finally, the bus began to move again – it seemed to take forever just to pick up two boys.  I then thought back to my childhood days and riding the school bus.  As soon as I crossed that white line on the floor at the front of the bus the doors closed and the bus sped off to the next stop, adding the dimensions of speed and bumps and movement to the normal tussling.  It took balance and strength to make your way to the seat.  Quite frankly, I sometimes didn’t make it to a seat without being deliberately shoved, or through my own clumsiness, stumbling and nearly falling.  It was a challenge – but I never considered it as such.  To me, it was “normal.”

Our school bus practices now are far more safe and part of a widespread effort to insure the safety and comfort of our children.

Who can be against that?

At the risk of getting some “what are you thinking” emails and maybe even a few cancelations, I am going to go out on a limb and suggest that our society’s collective efforts in protecting our children have, in subtle ways, removed “opportunities for falling down on the bus” and other failures.  Failure is simply not allowed.  Adversity is to be minimized.

Consequently, a healthy attitude toward failure and adversity is often undeveloped.  A few years ago, I was hired as the dryland training coach for a local high school.  During a heavy weight lifting cycle I explained the concept of lifting to failure.  (Lifting to failure, by the way, is an accepted and common practice in weight training.  Widely written about and researched, it is the de facto method for improving strength.)  Failure, as a concept, was so foreign to these high schoolers that they didn’t get it.  Even when I demonstrated it, they still didn’t get it.  Have we painted failure so darkly that no one gets the importance of it anymore?

I am happy to report that some do still get it.  Recently we interviewed a young person for an open position and when asked what she was really good at she replied that she was very good at failure.  She explained that it was through failure that she learned how to succeed.  How refreshing it was to hear that!  (And yes, she was a former national level swimmer.)

Last week I attended a lecture by a former Navy SEAL who, after over 30 years of service, is now part of the SEAL training team.  He explained the SEAL Ethos and what stood out to me was the phrase, “Forged by Adversity.”

“Forged by Adversity” is at the heart of what we do with our upper-level, older age group swimmers and all advanced senior swimmers.  Adversity, however, is not something normal people deliberately seek.  Most avoid it.  All good coaches find that it is one of the greatest tools for shaping swimmers not only into great swimmers, but into future grownups with one of the best of all the life skills.

Adversity provides the opportunity to build determination, build confidence, build mental strength, give perspective, and to build physical toughness.  Are these not qualities we want in all our children?

Arnold Schwarzenegger said, "Strength does not come from winning. Your struggles develop your strengths. When you go through hardships and decide not to surrender, that is strength."

And in swimming practice, adversity comes from sets, or possibly whole workouts, deliberately designed by the coach to make the athlete fail.  The coach does that by creating a set where a combination of the distance, the intensity, and a low rest interval make it difficult if not impossible to make.  There are many strategies and methods for doing this that go beyond the scope of this newsletter AND these strategies include a progression for how much adversity is presented at what ages, but the bottom line is this:  Swimmers get better through a workout environment that offers the opportunity for failure.

And so, Parent, what is your role in all of this?  I hope you refrain from seeking to protect your child from the adversity and opportunity for failure at swimming practice.  To do so is to deny your child the opportunity for building the qualities described above.  Instead, consider your role as the encourager.  Encourage your swimmer to persevere, to break through, to come back the next day determined to work harder against the adversity placed there by the coach.  Then enjoy and celebrate the moment when your child does break through.  (And they will!)