Chitwood Is Golden On Day 3 of NCAA's 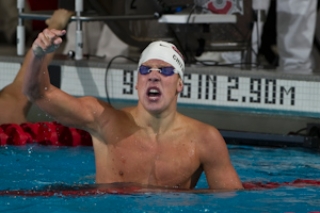 COLUMBUS, Ohio, March 28. ARIZONA's Cory Chitwood completed a remarkable comeback after a shoulder injury forced a medical redshirt last year and a bout with the noravirus the day before the NCAA Championships were to begin this year.

Chitwood concluded the journey back from injury with an amazing swim in the 200 back. Chitwood threw down a 1:39.29 for the win, breaking Matt Grevers' (Olympic Gold Medalist)2007 pool record set for Northwestern. The performance jumped Chitwood to sixth all time in the event, behind only Ryan Lochte, Tyler Clary, Aaron Peirsol, Jake Tapp and Grevers. Chitwood also became the first Wildcat to ever win the event at the NCAA Championships.